Being flat broke is the salvation of architecture 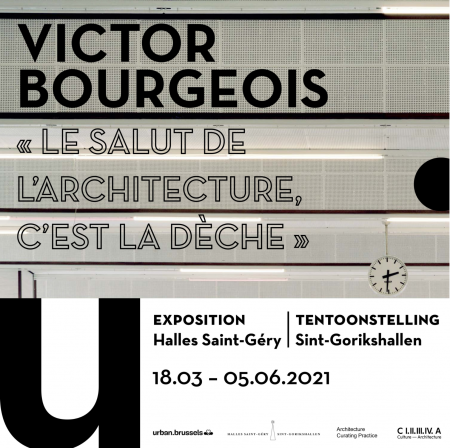 Victor Bourgeois (1897–1962) was the pivotal figure of the international Modern Movement in Belgium. In the 1920s he built the Cité Moderne in Brussels, a cooperative housing project, and was invited to design a house for the Weissenhofsiedlung in Stuttgart.

Together with his brother Pierre, he founded the artistic weekly 7 Arts, which developed into the most important mouthpiece of the Modern Movement in Belgium. As one of the youngest founding members of the CIAM (International Congresses of Modern Architecture), he played an important role in its early years.

Bourgeois was extremely committed socially and always linked his interest in form to ambitions of social reform.

This exhibition consists of two parts.

On the one hand, it contrasts, in 17 diptychs, recent photographs by Maxime Delvaux with images that Bourgeois himself made of his work.

The contemporary gaze enters into dialogue with the historical document, not so much in order to explain how the building was transformed, but rather to document our changing way of looking at it.

On the other hand, the exhibition presents a comprehensive overview of Bourgeois’s oeuvre on the basis of 33 projects. It is arranged according to five chronologically ordered themes that correspond to his own shifting focus.

The exhibition can be visited at the Halles Saint-Géry, in partnership with Urban.brussels, Iwan Strauven, CIVA and Architecture Curating Practice.

You can find more information about the publication ‘Victor Bourgeois. Modernity, Tradition & Neutrality‘ on our publication page.