Symposium: The Practice of Architectural Research

The symposium ‘The Practice of Architectural Research’ aims to re-define the field of architectural research and invites practicing architects and historians operating within academia to reflect on their lived expertise. 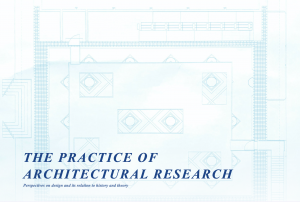 ‘Are architects who write a dying race?’ asks Belgian architectural theorist and historian Hilde Heynen. This symposium takes up her challenge to reflect on the role of the practicing architect in academia. Building a critical platform for writing architect-scholars and scholars exploring the relation between architectural practice and culture, the intention is to create new and fecund relationships between the practice of theory and that of architectural production. During the 1960s, academia saw the rise of architectural theory as an autonomous discipline, from which emerged theoretical architectural practice: the discipline of critical architectural theory became ever more divorced from the sphere of production and the world of action, instead defining for itself an autonomous, self-referential intellectual realm. In the 1990s architects working in academia like Frampton, Pallasmaa, Ockman or Mallgrave began to bridge the hiatus between practice and theory, developing analytical research methods that combined ontological research with exemplary buildings. These approaches shared a focus on the classical canon of architecture, the authoritative voice of the architect, and the production of grand narratives. Today, it is valid to question whether this approach is still viable, when the current intellectual climate in which debates around decolonization, material and social agency debate and post-metoo feminist perspectives challenge this canonical approach …