It is with deep sadness that Docomomo International announces that last Saturday, 18th December 2021, Richard Rogers passed away. Docomomo International wishes to convey the most sincere condolences at the passing of the Italian-English Pritzker Prize winning architect to his family and friends. Co-designer of the Pompidou Center, Richard Rogers was one of the most renown architect of the hi-tech architecture aside from Normand Foster or Renzo Piano. 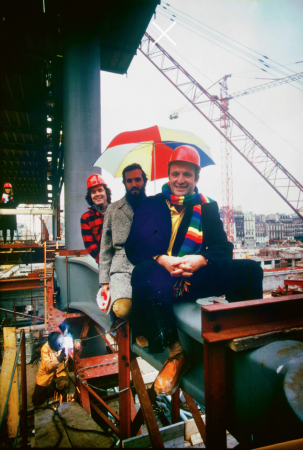 His “inviting, colorful modernism forever altered the cityscapes of Paris and London (…) With his striking designs for the tubular Pompidou Center in Paris; the vast Millennium Dome in London, which seemed to hover like an alien spaceship; and the brash Lloyd’s of London building, with its soaring atrium, Mr. Rogers turned architecture not just inside out but also on its head.

When he was awarded the Pritzker, architecture’s highest honor, in 2007, the jury cited his “unique interpretation of the Modern Movement’s fascination with the building as machine” and said he had “revolutionized museums, transforming what had once been elite monuments into popular places of social and cultural exchange, woven into the heart of the city.