During the award ceremony of the first edition of the Brussels Architecture Prize last Monday 13 December, the winners were revealed to the public. The international jury chose Lucien and Simone Kroll as emblematic Brussels firm for the Lifetime Achievement Award 2021.

more info in FR and NL 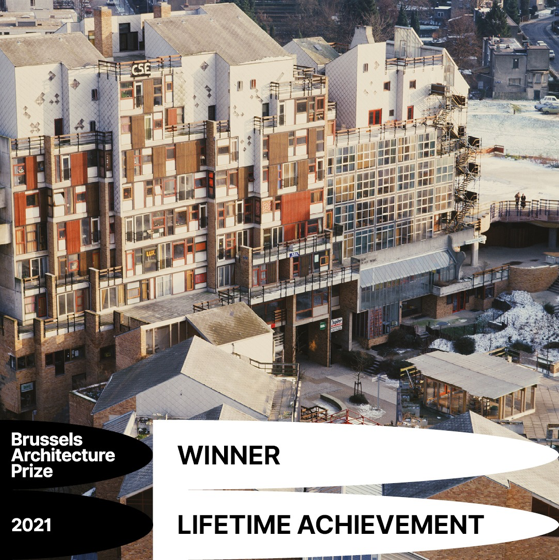 As Simone Kroll says, ‘it’s the story of a career’, before adding, ‘well, career is a mighty big word!’i This sums up the achievements and values of the Simone and Lucien Kroll architecture and urban planning studio: a considerable body of work (more than 100 projects between 1955 and 2008), relentless commitment, and sincere modesty. But let there be no mistake. Systematically drawn to complex situations, conflicts to be resolved and causes to be defended, Simone and Lucien Kroll never chose the easy path. Connected to contemporary realities, concerned about the world as it is evolving, they prove themselves to be, at the age of 94, more anti-establishment and anarchist than ever. The Lifetime Achievement Award of the Brussels Architecture Prize puts the spotlight on these pioneers of participation and ecology, and thus rewards the long, difficult but happy career of this extraordinary couple of designers.

I would be lying if I said that I was drawing an objective portrait here. One does not emerge unmoved from four years of filming alongside Simone and Lucien Kroll, moments of rare familiarity inevitably leaving their mark on meii. Indeed, anyone who crosses their path cannot remain indifferent, neither to the acuity of their words, nor to the beauty of the place they live in, nor to their caustic personality, a blend of biting humour, admirable generosity, disconcerting cynicism and complex humanist and anarchist ideas. It is an aura that must be tamed before it can be enjoyed.One can assume that their cheeky side has played tricks on them, as the list of their unfinished projects perhaps shows. They rarely made concessions, as Paul Davies suggests in The Architectural Review: ‘Nobody stuck to his guns longer and tighter than Kroll.’ …