Expo CIVA: Negotiating Ungers – The Materiality of the Social

The Oberhausener Institut zur Erlangung der Hochschulreife (today: Niederrhein-Kolleg) realized by the German architect Oswald Mathias Ungers between 1953 and 1959 is a design for a school that combined a progressive pedagogical approach with a new architectural language. Ungers‘ project linked the architecture of the Federal Republic of Germany to the larger European post-war context. The design followed emancipatory ideas; the spatial arrangement and the material aesthetics of the school were conceived in close dialogue with the desired social processes and structures. 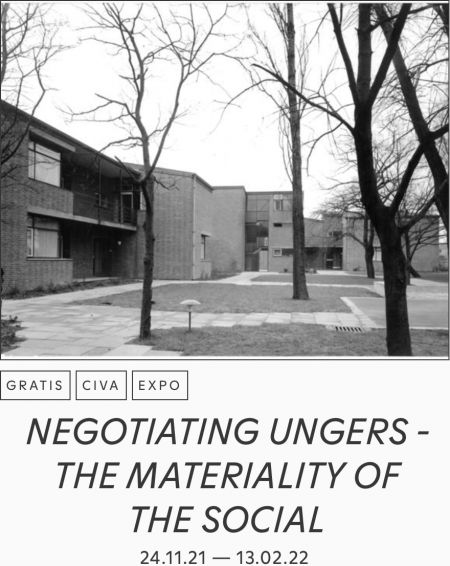 The project is used as the starting point to take a new look at both Ungers’ work and approaches to sociology in architecture. During a summer school at the Ungers Archiv für Architekturwissenschaft in Cologne in July 2019 the project was analyzed with students from the KU Leuven, Faculty of Architecture and the Kunstakademie Düsseldorf.

Following the summer school, nine students decided to continue their work on the subject and to further expand on the ideas developed. The results are now presented in an exhibition at CIVA. Rather than delivering an overall interpretation of Ungers’ project, the exhibition represents a plurality of voices, reflections and interpretations of the design. Besides original drawings by Ungers, the exhibition includes installations and analytical presentations, which critically negotiate Ungers’ project.