A. J. Lode Janssens (b. 1941) is one of Belgium’s most radical architects and educators. However, for the past two decades he has been living in voluntary exile, resisting any form of public life. Throughout his career he had an ambiguous relationship with architecture, fascinated by its experimental possibilities but equally appalled by its often presumptuous nature. 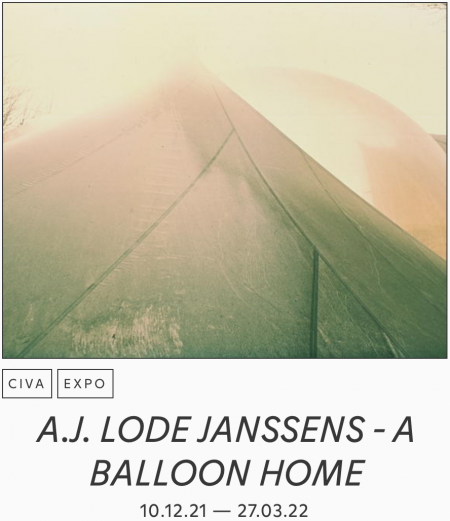 The CIVA exhibition, curated by Peter Swinnen and Nikolaus Hirsch, on Janssens’ prolific yet understudied architectural attitude centers on his Balloon (Humbeek, 1973–82)—a temporary pneumatic home experiment, an uncompromising ephemeral attempt at de-architecturalization and harmonizing with nature. An experiment with and through life itself. The exhibition showcases a ¼ scale model of the structure (produced by CRIT.architects) as its centerpiece, allowing the public to fully grasp the architect’s experiment. Together with original and hitherto unexhibited archival material, the exhibition highlights Janssens’ trial-and-error spatial research practice. Additionally, the exhibition features an installation by Marc Godts which acts as an atmospheric approach to A.J. Lode Janssens’ experiment. The SLIDEMONSTER is a cluster of 6 heavy-duty projectors and media-players mounted on a made-to-measure support-structure, projecting a selection of the original slides of the balloon. Within the framework of the exhibition, a masterstudio with students of the KU Leuven Faculty of Architecture encouraged students to delve into physical and psychological aspects of the balloon home experiment.

A.J. Lode Janssens studied architecture and urbanism at the Sint-Lucas School of Architecture. While he was a student, Willy van der Meeren enlisted him and together they founded Atelier Alpha in Sterrebeek, active from 1964 to 1968. Thereafter Janssens started his own practice, developing in parallel an educational curriculum focused on social and spatial symbiosis. In 1979, Janssens founded the Sint-Lucas Werkgemeenschap (SLuW)—developed in sync with his involvement with Giancarlo de Carlo’s International Laboratory of Architecture and Urban Design (ILAUD)—linking architectural education, practice, and research-by-design. In 1991, Janssens became head of department at the Sint-Lucas School of Architecture, allowing his unique architectural engagement to come full circle.

The exhibition is accompanied by the publication A. J. Lode Janssens / 1,47 mbar as well as the documentary A Gentle Pressure.