The British organisation Twentieth Century Society (C20) organises in January some great online events you can already book here. You can also catch-up on the free past events and ticketed past events. 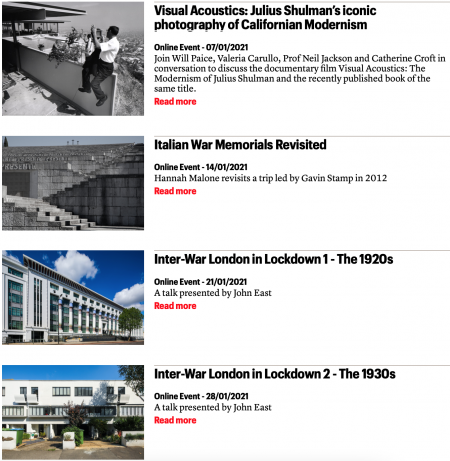 Thu. 7th Jan, 6.30pm:
Visual Acoustics: Julius Shulman’s photography of Californian Modernism, by Will Paice, Eric Bricker, Valeria Carullo & Neil Jackson
The panel will discuss what makes Shulman’s work so distinctive, why the architecture of Southern California was so influential and why it remains so popular today. They will also explore how Julius compares to other photographers.
Book here

Thu. 14th January, 6.30pm:
Italian War Memorials Revisited, by Hannah Malone
Revisiting the C20 trip led by Gavin Stamp in 2012, this talk will explore the cemeteries that were built by Italy’s Fascist regime in the 1920-30s for soldiers who had fallen in the First World War. Combining modernist architecture with hints of the medieval fortress, the cemeteries embody a unique interplay of modernity and tradition.
Book here

Thu. 21st January, 6.30pm:
Inter-War Lockdown London 1: 1920s, by John East
As C20’s ‘unofficial photographer’ John East would usually kick off the New Year with a review of C20 events from the previous year. Next year, he will instead show spectacular images of London’s inter-war architecture taken during the 2020 lockdowns. The first evening will focus on the 1920s, starting with the impact of the end of WW1 and the ‘Homes Fit for Heroes’ campaign, through to the flowering of the ‘Jazz Age’, the emergence of Art Deco and the seminal buildings from that era that are now so loved.
Book here

Thu. 28th January, 6.30pm:
Inter-War Lockdown London 2: 1930s, by John East
If the 1920s were the hors d’oeuvre, then the 1930s is the main course as many of the styles which had their seed in the 20s magnificently flowered in the decade before the War. New styles and forms of architecture emerged, whilst over a decade after Le Corbusier’s Vers Une Architecture, international modernism at last made an appearance in the capital.
Book here