A painting and audiovisual exhibition by Bea Sarrias & Morrosko Vila-San-Juan. The Embassy of Spain in Brussels shows two large paintings and a documentary and in La Vallée are about 15 pieces of various formats and a documentary.

The Idea
Barcelona and Brussels – Coderch and De Koninck: two universes, two ways of understanding light and space. Both of them, architects and designers, have left their mark and have written the History of Architecture of the 20th century. And today his work is still studied and admired.

Both rationalists, the two of them analyzed and understood very well the society in which they lived and their needs. And both transcended their time with their works: José Antonio Coderch in Barcelona and the Mediterranean coast and Louis Herman De Koninck in Brussels and surroundings.

The Project
The exhibition is based on paintings, drawings and audiovisual material based on some of Coderch and De Koninck’s iconic works. The work of these two great creators is explained by their respective context through architecture, design, painting and video. The paintings and documentary can be seen both in Brussels and in Barcelona and can also tour other cities with the support of institutions interested in preserving and promoting this architectural heritage and the collaboration of some of the owners of the houses. In addition to the architecture, Sarrias and Vila-San-Juan are interested in showing the stories of the different houses and of the people who lived in them and preserved them. 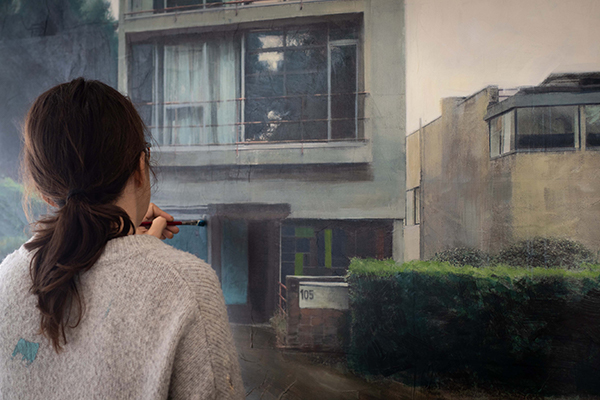 The Artists
Bea Sarrias has developed much of her work in Barcelona, where she studied Fine Arts and soon became interested in architecture and the portrait of iconic spaces. Her work, based on the works of important Spanish and international architects, has received several recognition samples, mostly highlighting her virtuous handling of light and shadows.

Among her most recent projects, it is worth highlighting the large portrait she painted live a few months ago at NATO headquarters in Brussels. Shortly after, she held an artistic residence at Mana Contemporary, in New York, where he worked on the footprint that architect J. L. Sert had left in the city. Bea has worked and researched the Mediterranean architecture of Coderch for a long time, having direct access to many of the houses he designed and contacting with the people who have lived in them and all the experts in his work.
www.beasarrias.com

Morrosko Vila-San-Juan is a filmmaker. Born in Barcelona in 1970 and graduated in Philosophy, he has a long career as a filmmaker and journalist. He has written, directed and produced numerous documentaries, as well as video creation pieces. He regularly collaborates with different televisions (TVE, TV3, Betevé), institutions and art centers (CCCB, MACBA, Flux. Author’s Video Festival), as well as with written and digital media and also teaches audiovisual classes in various universities.

Together with Bea Sarrias, he has recently made audiovisual pieces inspired by iconic architecture, such as Un día en La Ricarda (“A Day at La Ricarda”) (selected at the Loop Festival in Barcelona and screened in several countries) and La Cima de Coderch, un sueño incumplido (“The Peak of Coderch, A Dream Unfulfilled)”, presented in the Barcelona Design Week.
www.morrosko.net

This exhibition is supported by Spain Arts & Culture (Embassy of Spain in Brussels), Martin’s Atelier and Open Earth Foundation (with residencies Reopening Boxes in LaVallée).