From July to September 2019, BOZAR, Fundació Mies van der Rohe (Barcelona) and Federico II University (Naples) are organizing 6 artist residencies in 20th century houses across Europe, built or once inhabited by remarkable cultural figures: the Casa Vilaro in Spain, the houses of Olivier Strebelle and Willy Van Der Meeren in Belgium, Giuseppe Fiorelli and Sol LeWitt in Italy and Marcel Iancu in Romania. 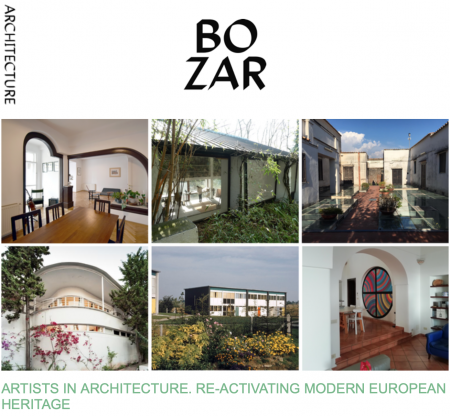 The aim of the project is to re-activate lesser known European cultural heritage. The residencies have been prepared during 2018 and 2019 together with diverse European universities. The outcome of the residencies will be visible in the three partners’ institutions in the form of an exhibition wall during autumn 2019.

Out of 362 candidates who applied to the open call, 64 were preselected. An expert jury per house identified 5 finalists per house, from which 1 winner per house was defined.

The 6 selected artists are the following: