Lecture by Ita Heinze-Greenberg: Erich Mendelsohn. And the Architecture of Dialogue 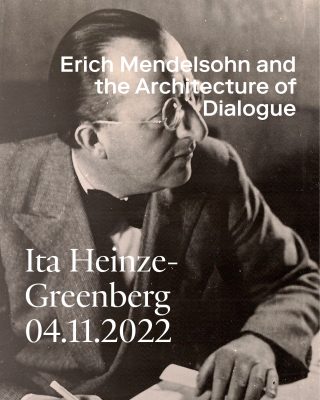 Erich Mendelsohn (1887-1953) was an extremely successful, internationally active architect, yet he remains one of the greatest unknowns. After his escape from Germany in 1933, he was confronted with completely new building tasks in different social and cultural environments: in London, Jerusalem and San Francisco. Everywhere, he left traces of his distinctive architecture. For Mendelsohn, architecture did not emerge as an intellectual abstract play of thoughts and forms, but in a complex factual and situational context. His architecture was always relational. In this respect, the lecture will focus on the relationships between form and material, music and architecture, space and time, home and exile, Occident and Orient and internationalism and regionalism.

Ita Heinze-Greenberg is an architectural historian and professor emerita of the Swiss Federal Institute of Technology (ETH) in Zürich. She held research and teaching positions at various institutions around the world. Her numerous publications concentrate on 19th and 20th century architecture with focus on nation building, identity construction, migration studies, and on the work of Erich Mendelsohn.