Agence Christiane Schmuckle-Mollard has been awarded the 2018 WMF/Knoll Modernism Prize for their outstanding preservation of the Karl Marx School in Villejuif, France. For the first time in the prize’s ten year history, a special mention was also awarded to Harboe Architects, PC for their preservation of Frank Lloyd Wright’s Unity Temple in Oak Park, Illinois. The biennial prize, which recognizes architects or designers who have demonstrated innovative solutions to preserve or save threatened modern architecture.

The Karl Marx School was designed and constructed by French architect André Lurçat according to functionalist principles that emphasized the logic and simplicity of the forms. It was described as “the most beautiful school in France” upon its inauguration in 1933 in the communist Paris suburb of Villejuif. By the 1990s, though continuously occupied since opening, the poorly maintained complex was in danger of being lost. In 1996, the Karl Marx School was listed as a National Historical Monument in France, bringing new resources to undertake a restoration that would preserve the integrity of the structures while adapting them to new regulations.

Explore the preservation of the school 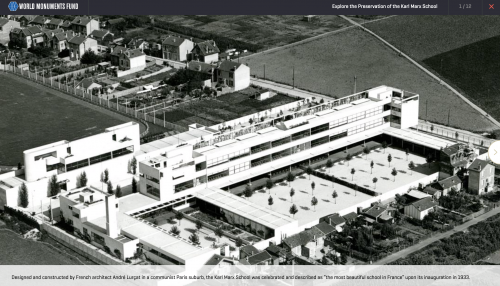 About the World Monuments Fund/Knoll Modernism Prize:
Forward-thinking. Experimental. Bold. Progressive. Innovative. Once recognized for their defining characteristics, significant modernist sites around the world are victims of physical deterioration of materials, perceived obsolescence, and public apathy. These threats repeatedly result in inappropriate alterations or demolition. With many modern buildings too young to qualify for landmark designation and protection, the need for preservation is urgent.

Launched in 2008 with founding sponsor Knoll, WMF launched the biennial World Monuments Fund/Knoll Modernism Prize to recognize the individuals and organizations that preserve our modern built heritage through innovative architectural or design solutions.
Now, in its tenth year, the biennial prize recognizes architects or designers who have demonstrated innovative solutions to preserve or save threatened modern architecture.