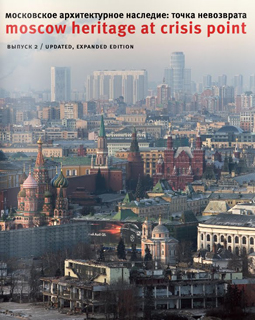 Buildings under threat include internationally famous landmarks: The Bolshoi Theatre, Mayakovskaya Metro Station, Monuments of the Avant-Garde, plus buildings that are an inseparable part of Moscow’s identity like Children’s World Department Store and the Central House of Artists.

Report possible due to the support of the late Scholar of Russian architecture and Co-Founder of Do.Co.Mo.Mo. Catherine Cooke.

The report is a follow up to the 2007 report, which brought the crisis that Moscow’s heritage is undergoing into the centre of national and international attention. Despite the successes of the report, the destruction continues. The scale of the threat is such that a new edition of the report was considered necessary.

The new report details the changes of the last two years – what new losses the city has suffered, which buildings are under continuing or new threat, why this is happening, and also outlines the path for a more sustainable future for the city.

This new report from SAVE Europe’s Heritage and the Moscow Architectural Preservation Society (MAPS), with support from Do.Co.Mo.Mo International, condemns the losses while illustrating the astonishing range of historic building in Moscow, from medieval churches to elegant post-war modernism – all threatened by the furious pace of redevelopment of the city by a coterie of property developers during the tenure of Mayor Yury Luzhkov.

QUOTES FROM THE REPORT:

“To Muscovites who love and appreciate the architecture of their city, the over-scaled new monsters are an outrage, whatever lip service they pay to history, producing a mock heritage in place of authentic buildings quite capable of undergoing renovation to modern standards.”

“Strong criticism has been voiced by many Muscovites who love their city and its old buildings but have little chance to participate effectively in the planning process. Bravely, though, they continue to speak out.”

“Despite the impact that the numerous major upheavals throughout its history have had on its heritage, the city boasts many streets with remarkable harmony and consistency.” Marcus Binney, President of SAVE Europe’s Heritage

“I belong to a generation which views the contribution made by the Russian avant-garde towards the Soviet brave new world as the very origin of our modernity.”

“For a long time it was argued by the city government and developers that Moscow’s status as the capital made widescale demolition and redevelopment inevitable. It is now clear that where Moscow treads, Russia follows.”

“Our task in this report is to show that such treatment of historic buildings falls well short of internationally accepted best practice. But it is also to show that there are plenty of specialists capable of proper restoration and imaginative but sensitive conversions of historic buildings in Moscow, and that it is time more heed was paid to them.”

Clementine Cecil and Edmund Harris, editors of the report

“During the course of 2007, the year when the first edition of ‘Moscow Heritage at Crisis Point’ was released, not a single listed building was condemned to be demolished. But this turned out to be only a temporary reprieve for the city’s heritage. Since the beginning of 2008 numerous other buildings have been destroyed outright or suffered major losses to their original fabric.”

“The scale of destruction is almost comparable to that of the 1930s-1960s, the difference being that today what is under attack is those few structures that were lucky enough to survive Stalin and Khrushchev’s purges.”

“Today, there is no other capital city in peace-time Europe that is being subjected to such devastation for the sake of earning a fast megabuck.”

“Never has Russia strayed so far from the scientific principles and methods endorsed by the international academic community, from observing the doctrines dealing with heritage conservation.”

“The outcry caused by the demolition of the Hotel Moskva and the reconstruction of Children’s World is a testament to the affection and esteem in which Stalin-period buildings are held by Muscovites.”

“…the Khrushchev ‘thaw’ [and] the period of stagnation under Brezhnev produced worthwhile buildings, without which Moscow would be all the poorer. The Federal Law on historic buildings states that only structures put up a minimum of 40 years ago can be granted listed status. This means that it is high time that the process began of listing buildings from the 1960s.”

“An all-round lowering of standards, the triumph of vandalism and the obstruction of every last vacant space on the skyline is the legacy that the last decade has bequeathed to Moscow.”

On St Petersburg: “Given the astronomical value of land in the historic centre, investors are doing their utmost to squeeze a return out of any empty plot, a virtually non-existent commodity there.”

“In just the last six years over 100 historic buildings have been destroyed in St Petersburg, many of which were officially state-protected.”

“Historic buildings making up the urban fabric are systematically being consigned to oblivion – that is, buildings which […] in their totality create the unique cityscape without which St Petersburg as we know it ceases to exist.”

INFORMATION ABOUT THE AUTHORS

Edmund Harris is a Cambridge-trained Russianist who has been a Moscow resident since 2003. He is a trustee of MAPS and was involved in setting up the organisation in 2004 with Clementine Cecil and Kevin O’Flynn.

Clementine Cecil is a journalist and campaigner for the preservation of built heritage. She lived in Moscow from 2001 to 2005. Cecil is a co-founder and trustee of MAPS. She is also involved in a project to conserve churches in Tver region with the Paul Khlebnikov Foundation.

Anna Bronovitskaya is an architectural historian, associate professor at the Moscow Architecture Institute, and an editor of ‘Project Russia’ and ‘Project International’ magazines.

MAPS was set up in May 2004 by a group of international journalists and architects who work in close cooperation with preservationists, architects and historians within Russia and abroad to raise awareness about the present destruction of Moscow’s historic buildings. They use the press to give Russian preservationists and Muscovites a greater international voice. MAPS is concerned about the fate of buildings under threat from all periods of Moscow’s architectural history, including both well known landmarks and lesser known buildings which have yet to be fully appreciated, but deserve to be saved for posterity. MAPS aims to convince the Moscow Government, developers and architects that the unchecked demolition of Moscow’s heritage is not in the city’s long-term interest. MAPS monitors specific buildings in Moscow.

In May 2007 MAPS published a report: Moscow Heritage at Crisis Point (Московское Архитектурное Наследие: Точка Hевозврата), а co-publication with SAVE Europe’s Heritage, which can be downloaded as a PDF file from our site: www.maps-moscow.com.

SAVE Europe’s Heritage was founded in 1995 as the sister organization of SAVE Britain’s Heritage. The latter has existed for 30 years and is one of the most effective preservation groups in Britain. Founded by writer and journalist Marcus Binney, SAVE works through the press, writing reports on groups of threatened buildings or threatened areas. SAVE believes in taking action. One of their most important publications is the SAVE Action Guide which empowers local groups and individuals to wage campaigns for endangered buildings. SAVE also puts forward practical solutions for the rescue and use of historic buildings in danger in the recognition that only a small percentage of these buildings can be preserved purely as showpieces or museums. In exceptional cases, SAVE is willing to prepare and implement schemes for the rescue of individual buildings to show that rescue is possible and viable.

SAVE Europe’s Heritage has written two reports on buildings in France and Hungary and a report against the construction of a motorway across the Veneto in Italy. This is the second time they have collaborated with MAPS on a Moscow report.www.savebritainsheritage.org

Do.Co.Mo.Mo. (the Documentation and Conservation of buildings, sites and neighbourhoods of the Modern Movement) is an international organization that promotes the study, interpretation and protection of the architecture, landscape and urban design of the Modern Movement. It was founded in 1990 in the Netherlands and today it has working parties in 49 countries and over 2,000 individual members. The organization brings together historians, architects, town-planners, landscape architects, conservationists, professors, public officials and students. Among its many activities Do.Co.Mo.Mo. publishes a bi-annual journal, an effective way of exchanging new research.