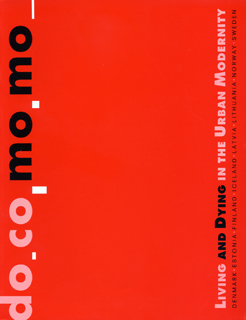 This publication is the third in a series of publications made in the context of the Nordic and Baltic chapters of the international organisation Docomomo (documentation and conservation of buildings, sites and neighbourhoods of the modern movement). The subject of this publiation is the larger estates from the 1960s and the 1970s, their role in the crises of modernism and its proclaimed death in the 1970s and, at least as a theme of high future priority, their possible continued life.

From the book: ‘The modern city, as developed in the post WWII decades, is characterised by zoning, a large-scale division into more or less mono-functional areas or estates. The life of the citizens of the modern welfare state is organised from cradle to grave in a relay of functional zones, starting with the housing estates including day nurseries and schools, progressing through studies in university campuses, working in industrial estates, shopping in shopping centres, ending up in large hospitals and finally in landscape cemeteries.

The structure of urban modernity has its ideological backgrounds as well as consequences. It had its advocates in 1930s early modernism, its blooming period in 1950s and 1960s expansion and reconstruction of cities and its critics in 1970s afterthought, forming an ideological life cycle from the birth and cradle of modernism to its supposed death and grave. To organize the life of our largest and most durable artefacts from cradle to grave, or rather from cradle to cradle, meaning a sustainable ecocycle society, has become a challenge for our cities.

The urban modernity of the Nordic and Baltic countries, which is the subject of this publication, is typical for all the aspects of this development. The most striking with the material collected in this publication is maybe the strong similarities of the developments, from Iceland to Lithuania. This was a truly international style of urban planning. In some ways the Nordic welfare states were leading both the development of the new model and the later criticism against it. The Nordic, or Scandinavian, model was influential also across the political border between West and East during the cold war. The inclusion here of the Baltic countries, which at the time were part of the Soviet Union, gives material for a comparison of the “middle way” of the welfare states with the communist model.’

The publication ‘Living and Dying in the Modern Urbanity, a cooperation of Nordic/Baltic docomomo’ is edited by Claes Caldenby and Ola Wedebrunn and published by The Royal Danish Academy of Fine Arts, School of Architecture and Chalmers Göteborg with support from the Nordic Culture Fund.