DOCOMOMO JOURNAL 65: Housing for All 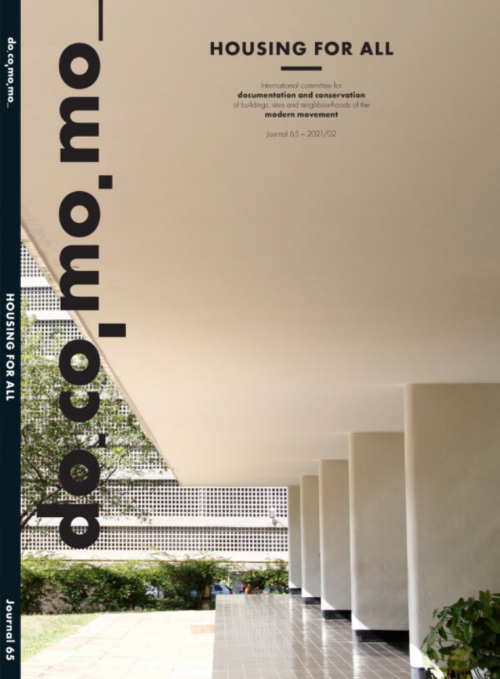 Housing for the greatest number By ANA TOSTÕES

This is the third journal dedicated to the housing question. In 2014, docomomo Journal 51 discussed modern Housing as “Patrimonio Vivo”, considering the modern home to explore topics of public and private life, intimacy, exposure, and gender. The house, whether at the level of a cell, a module, a system, or expanded across an entire city, has always been a fundamental subject for debate within the architecture of the Modern Movement addressing the “magic formula”: light, air and openness. docomomo Journal 54 “Housing Reloaded” was published, two years after, focused on the strategies used and challenges faced by those attempting to preserve post WWII collective housing in Europe.

In 2021, on the occasion of the last journal edited by me, it was decided to reaffirm docomomo’s acknowledgement of the major relevance of reflecting the housing question and explore the subject once again. I wish to thank and acknowledge the commitment of Zara Ferreira, who acted as guest editor for this docomomoJournal 65. Her work and perseverance were emulated by the authors who contributed generously with their knowledge and research.

EDITORIAL
Housing for the greatest number By ANA TOSTÕES

Preserving a modern housing model: the restoration of Pedregulho Housing Neighborhood By FLÁVIA BRITO DO NASCIMENTO

Reconstructing housing and communities: the INA-Casa Plan By ROSALIA VITTORINI

Avanchet-Parc in Geneva: an experimental housing scheme, an exemplary complex By FRANZ GRAF AND GIULIA MARINO

Preservation and public housing in the United States By THEODORE PRUDON

The Chandigarh Sector By SANGEETA BAGGA

The young Paulo Mendes da Rocha: Jockey Club of Goiás and a modernity project By ELINE CAIXETA AND CHRISTINE MAHLER