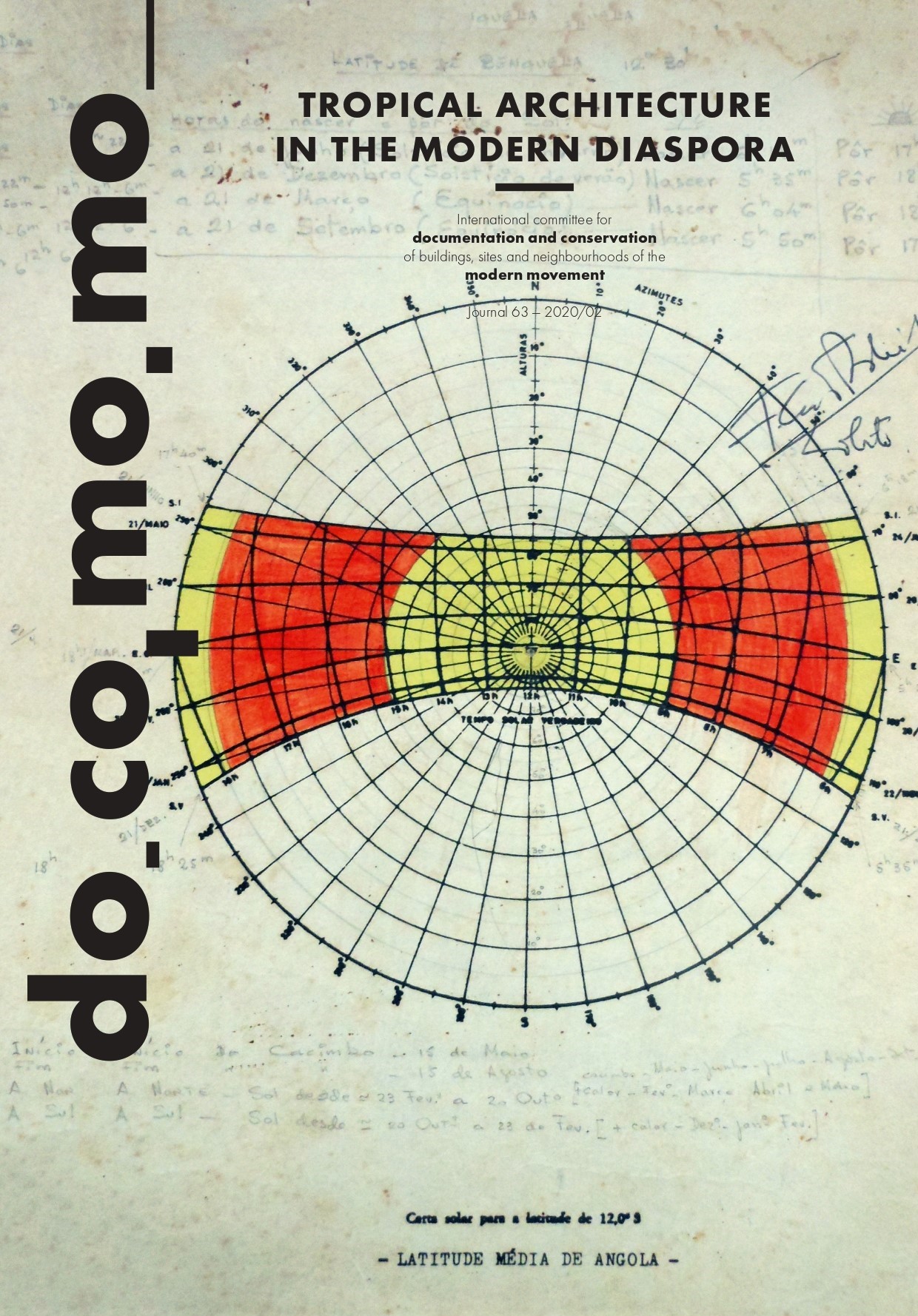 Tropical Architecture, South of Cancer in the Modern Diaspora
BY ANA TOSTÕES

The cover of this docomomo Journal 63, showing the sun path diagram from 12ºS, Lobito, Angola, 1969, is an homage to Francisco Castro Rodrigues (1920-2015) one of the modern diaspora’s architects who believed in a new world. Having Le Corbusier (1887-1965) and modern Brazilian architecture as role models, he struggled for be a truly modern architect, which meant contributing, through urbanism and architecture, to a democratic, healthy, and happy way of living. Through his architecture, he explored the principles of the Modern Movement, combined with local concerns, in social, economic, and climatic terms. Besides urbanism and architecture, he organized exhibitions, created an Anthropology Museum, actively published in journals and magazines, was head of radio and cine-clubs, and a Professor at various levels of education, continuously contributing to the cultural evolution of the city of Lobito and its people.
Seven years after our issue on Modern architecture in Africa, DJ 48 (2013), the theme of this docomomo Journal 63 is “Tropical Architecture in the Modern Diaspora”, gathering from the Global South, from Australia to Singapore, the thoughts of a range of skilled researchers on this subject, with the aim of updating the discussion to “fill the gaps” identified by Jane Drew (1911-1996), Maxwell Fry (1899-1987) and Otto Königsberger (1908-1999), within a reflection on its broader diaspora. Getting back to the point of “Tropical architecture,” “architecture in the humid tropics is collaboration with nature to establish a new order in which human beings may live in harmony with their surroundings.”[1] As publications at the time concentrated on French and British colonies,[2] to achieve a comprehensive understanding of the Modern Movement diaspora,[3] it is essential to revisit, analyse, and document the important heritage built south of the Tropic of Cancer, where the debate took place and architectonic models were reproduced, and in many cases subjected to metamorphoses stemming from their antipodal geography. Notable for the modernity of its social, urban, and architectonic programmes, and also its formally and technologically sustained research, the modern architecture of these latitudes below the tropics constitutes a distinctive heritage.
As the editors argue, the “fresh new ideas from the periphery began to question the limited vocabulary of tropical architecture”, and this issue presents unexplored examples of groups who settled in different countries – from Thailand, Philippines, Mexico, Indonesia, Hong Kong, Macau, and across the Pearl River Delta, to Angola, Australia, Brazil, India, Congo, and Hawaii. The approach of the architects to the ecology, environment, and culture of the countries below the Tropic of Cancer revealed their ability to adapt to new worlds. This was further demonstrated in their efforts to deal with health problems related to tropical diseases, and their recognition of the importance of traditional and vernacular building in a new context. docomomo Journal 63 shows how the cross fertilization of subjects generated by tropical architecture combine with echoes of the Modern Diaspora to provoke new narratives: Lourdes Cruz’s essay bring us this vision through Kenzo Tange’s (1913-2005) Japanese Embassy in Mexico (1973-1976), developed with Pedro Ramirez Vasquez (1919 2013) and Manuel Rosen Morrison (1926-2018); Setiadi Sopandi analyses the work of Indonesian architects on tropical climate and environmental design. Jean-Claude Girard presents the fascinating work of Leandro V. Locsin (1928-1994); Pongkwan Lassus celebrates the 110th anniversary of the Makkasan Train Factory opening in Thailand, as well as the efforts to protect the complex; Moritz Henning, Sally Below, Christian Hiller, and Eduard Kögel, report on Encounters with Southeast Asian Modernism against the backdrop of the Bauhaus centenary (1919-2019), celebrated in docomomo Journal 61 – Education and Reuse (2019).
Due to the ongoing COVID-19 pandemic, the launching of docomomo Journal 63, which was scheduled to be presented during the 16th International docomomo Conference in Tokyo in 2020, has had to be postponed to 2021. In fact, the theme of the Tokyo Conference, “Inheritable Resilience: Sharing Values of Global Modernities”, is clearly linked with the overall concept of South of Cancer and of Tropical Architecture, and formerly outmoded ideas of physical isolation and natural ventilation are now re-emerging as more important than air-conditioned spaces, in the context of dealing with COVID-19.
Lastly, docomomo International is grateful to Pedro Guedes and Johannes Widodo who accepted the demanding role of guest editors for this docomomoJournal. Thanks to their perseverance, allied with the contribution and commitment, of the professionals, scholars and researchers who generously collaborated with their knowledge, it is with great pleasure that we are launching this journal.

Behind the Veils of Modern Tropical Architecture
BY PEDRO GUEDES

Monuments of Country, Climate and Culture: Michel Écochard and the Design of the Postcolonial Tropolis
BY TOM AVERMAETE

Alfred Preis and Viennese Modernism in Hawai‘i
BY LAURA MCGUIRE

Tropical Modernity: A Hybrid-Construct in South China
BY RUI LEÃO AND CHARLES LAI

The Japanese Embassy in Mexico: a Fortunate Association, a Threatened Heritage
BY LOURDES CRUZ

The Nature of Tropical Architecture in Indonesian Modernism
BY SETIADI SOPANDI

Religious Tropical Architecture: the churches of Leandro V. Locsin in the Philippines
BY JEAN-CLAUDE GIRARD

This docomomo Journal was done with the special collaboration of CiTUA [Centre for Innovation in Territory, Urbanism, and Architecture].