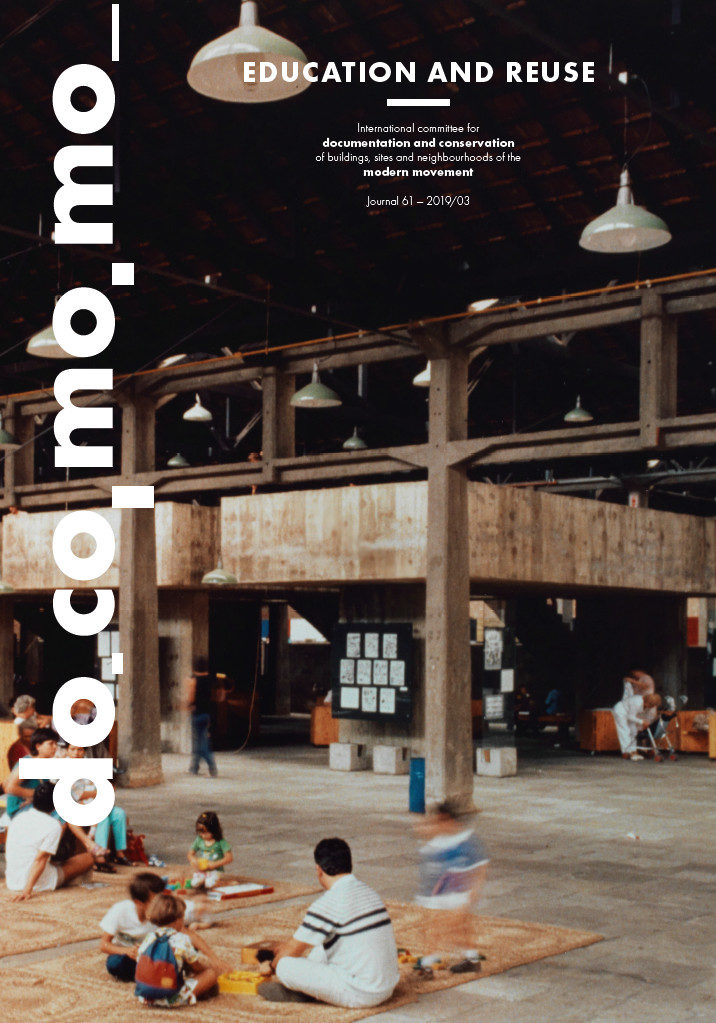 The theme of this docomomo Journal is that reuse is a key for both a sustainable future and for education. This issue also celebrates the Bauhaus centenary (1919-2019) and tackles the physical and ideological legacy of the German school while confronting it with the challenges we face today and the role that education might play in this fight to value Modern Movement architecture and to pursuit its longevity.

The Bauhaus had a pioneering influence on design worldwide which still endures today; through education, experimentation and materialization, a revolution took place in architecture, urbanism and design for mass production.

In 1918, during the immediate post-war period, Walter Gropius (1883-1969) achieved a fusion between the Kunstgewerbeschule and the Hochschule fur Bildende Kunst in Weimar, with the creation of an interdisciplinary school of design and crafts. In April 1919, he was elected director of the school which was by then called the Staatliches Bauhaus. He also published the Bauhaus Manifesto, which remains as a pioneering moment in history, with irreversible consequences at a global scale. The Bauhaus as a school, as a method of experimentation, education, and research, embodies the idea of science applied in service of the society. At the Bauhaus, utopia was combined with pragmatism, agitation and propaganda with public service, poetry with utility, Neue Sachlichkeit with creation and freedom. Its premises continue to be relevant today with the great issues of sustainability and democracy needing to be addressed through art and technology.

Aware of these concerns, the 14th International docomomo Conference, held in Lisbon in 2016 under the theme “Adaptive Reuse”, summoned up the pertinence and urgency of education for reuse as the key for a sustainable future, recalling the Seoul-Eindhoven statement updating the docomomo constitution with the concept of reuse. Within this scope of education, an Agreement of Collaboration was signed between docomomoInternational and the J. Paul Getty Trust (operating as the Getty Conservation Institute) with the aim of developing a report on the worldwide offer of educational programs and training courses on modern heritage conservation.

Additionally, docomomo joined several universities across Europe in the research project RMB – Reuse of Modernist Buildings – coordinated by Michel Melenhorst (Technische Hochschule Ostwestfalen-Lippe OWL University of Applied Sciences and Arts), who acts as well as guest-editor of this docomomo issue. The RMB consortium looked into the current paradigm of architectural education focused on 20th century architecture in order to develop a Master’s program that could bridge and enrich the growing field of rehabilitation and reuse.

I wish to thank Michel Melenhorst who accepted the challenge to work as guest editor of this “Education and Reuse” issue. His commitment and perseverance were shared by the authors’ who collaborated generously with their knowledge and dedicated work. A large variety of approaches and points of view are presented, showing the cross-fertilization of subjects that education and reuse of Modern Movement architecture raises, worldwide: from Brazil to the Netherlands, Israel to Germany, USA to Switzerland.

Barry Bergdoll’s essay, which illustrates the backstage and preparation of the 1938 exhibition Bauhaus 1919-1928 at the Museum of Modern Art in New York, allows us to analyze and understand how the main figures of the Bauhaus wished to present the school and its vision to the world. Jasmine Benyamin analyzes the educational program Gropius envisioned and developed at the Bauhaus, and the principles it ended up passing on to its students and followers. The impact of his ideas on theory and education, aiming for the unity of all arts, would take over the historiography of architecture, design and urbanism and still lingers to this day. Marina Epstein and Talia Abramovich elaborate on the demystification of Tel’Aviv as the mythical White City, presenting the real effect the Bauhaus had on the city. The Documentation Issue chapter presents an inspiring essay by Dietrich Neumann who generously shares with docomomo his recent research on the beginnings of the Bauhaus.

Other contributions document reuse projects whose main goal was to create new lives in architectural structures or public spaces, such as Renato Anelli’s essay on SESC Pompeia (Lina Bo Bardi, 1961) in São Paulo or Vincent Ligtelijn’s essay on the Amsterdam Playgrounds (Van Eyck, 1940’s), contributing to the debate on sustainability. In a thoughtful pause, Robert Huber’s essay allows one to reflect on architecture production talking about the different forces that could be involved in a process of preservation and how to find the balance between them while presenting the bauhaus reuse project. The topic of education for the reuse of buildings is deepened through the best practices reports on education conducted in two leading European architectural schools: EPFL by Franz Graf and TUDelft by Nicholas Clarke, Hielkje Zijlstra and Wessel De Jonge.

Finally, docomomo Journal is grateful to David Chipperfield and Wiel Arets for having provided the basis for two fruitful discussions on modernity and modern heritage, economy and sustainability, addressing the social mission and the responsibility of architects towards the future.

Memento mori or eternal Modernism? The Bauhaus at MoMA, 1938
BY BARRY BERGDOLL

Aldo van Eyck and the Amsterdam playgrounds
BY VINCENT LIGTELIJN

Bauhaus and Lina Bo Bardi: from the modern factory to the Pompeia leisure center
BY RENATO ANELLI

How did the Bauhaus get its name?
BY DIETRICH NEUMANN

This docomomo Journal was done with the special collaboration of DAAD; Erasmus + programme and the RMB Project [Reuse of Modernist Buildings].