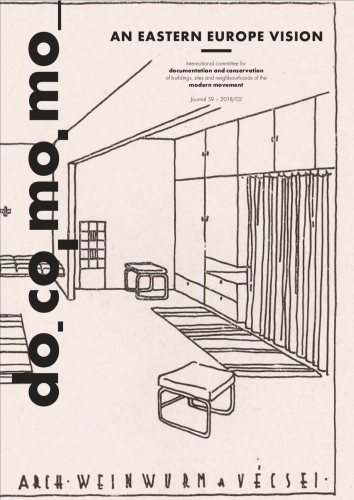 Towards a fresh reading of MoMo historiography

While visiting the MAO (Museum of Architecture and Design) in Ljubljana one can appreciate the architectural power of Stanko Kristl’s work [1]. The impressive buildings of this Slovenian architect revealed through the exhibition Humanity and Space, illuminate the beauty of the museum space with some astonishing works and show why Eastern Europe deserves to be included in the historiography of the Modern Movement, to clearly demonstrate the contribution of Iron Curtain countries to the modern avant-garde. As Matevz Celik recognizes, “through his architecture he worked to provide responses to the needs of the people — for whom it was intended. This basic premise served as a guiding principle in experiments and his search for spatial and social innovation in architecture.” [2]

Given the scope of the 15th International docomomo Conference — “Metamorphosis. The Continuity of Change”, which took place at Cankarjev Dom (by Edvard Ravnikar, 1960–1980), in Ljubljana, Slovenia, on 28-31 August 2018, this subject is definitely on the docomomo agenda. The theme of this 59th docomomo Journal challenges us to reinterpret the modern architecture of Eastern Europe.

During the last few years, authors and editors such as Philip Meuser [3] have been recounting a new history that includes the modern architectural legacy of former USSR and other Eastern European countries. The recently opened MoMA exhibition Toward a Concrete Utopia: Architecture in Yugoslavia, 1948–1980 [4] and Ákos Moravansky’s (ed.) monograph trilogy East West Central: Re-building Europe [5], published last year, are some of the freshest contributions to this movement towards what one might call the rethinking of MoMo historiography.

This DJ focuses on understanding the buildings, projects, personalities and phenomena located at this intersection of a world divided between the capitalist West and the socialist East. The dynamic of changing conditions in Eastern Europe countries contributed specific features to Modern Movement architecture and its local legacies. Bringing together narratives of scholars from the Czech Republic, Hungary, Serbia, Slovakia and Slovenia, this collection of texts is an overview devoted to modern architecture in some of the countries of the former Eastern bloc.

In this issue, diversified reflections are presented: from essays dedicated to collective habitare, such as housing blocks in the former Yugoslavia and Czechoslovakia, where the hotel typology is also explored; from WWII Memorials in Yugoslavia to interventions in emblematic public building, such as the intervention in the Slovak National Gallery and the restoration of the New Synagogue in Zilina; or the question of preserving industrial complexes in Slovenia. In Hungary, the historiography of post-war modern architecture is portrayed, and its inter-war architecture is also revisited in connection with the interpretation of the diffusion of the Modern Movement made by the local journal Tér és Forma. Finally, there is place for discussion about architects and their masterworks, as the Slovak architect Friedrich Weiwurm and the Slovenian architect Edvard Ravnikar. These examples of the Eastern European architectural avant-garde, often forgotten outside of the region for which were original designed, can now be brought to light and provoke new narratives. It is expected that coverage of these pioneering approaches will be further extended to abroader geographical area in a later DJ issue.docomomo is grateful to Henrieta Moravcikova for accepting the challenge to be guest editor of this DJ, and the authors for generously having shared their research. Due to their commitment and meticulous work, it is possible to present this Journal, which addresses the legacy of Eastern Europe architecture and its future.By Ana Tostões

EDITORIAL
Towards a fresh reading of MoMo historiography
BY ANA TOSTÕES

INTRODUCTION
Is there something behind the Iron Curtain? Documentation and conservation of Modernism in former Eastern Europe
BY HENRIETA MORAVCIKOVA

Communicating “space and form?”: The history and impact of the journal Tér és Forma as the Hungarian pipeline of Modernism
BY PÁL RITOÓK AND ÁGNES ANNA SEBESTYÉN

Metallic brutalism and its present embellishment. The addition to the Slovak National Gallery in Bratislava
BY PETER SZALAY

Edvard Ravnikar and The Heart of the City. The genesis of cultural centers in Slovenia and in ex-Yugoslavia
BY NATAŠA KOSELJ

Slovenian industrial heritage — complexity of meanings, their preservation and regeneration
BY SONJA IFKO

New Belgrade: past-present-future, and the future that never came
BY JELICA JOVANOVIC

On the wings of modernity: WWII memorials in Yugoslavia
BY VLADANA PUTNIK PRICA AND NENAD LAJBENŠPERGER

The New Synagogue in Žilina, Slovakia: participation as a method of heritage renewal
BY KATARÍNA HABERLANDOVÁ