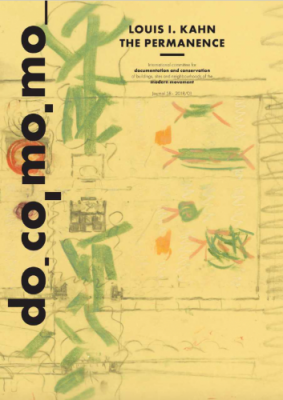 “You can never learn anything that is not a part of yourself.”
Louis Kahn, “Silence and Light”, 1969

“The Mediterranean is full of wonder and beauty. The parts I saw around Italy I shall never forget.”
Louis Kahn letter to Anne Tyng, 1953

“Louis I. Kahn fascinate us all with his passion for Mediterranean culture. Precisely at the moment when the centre of the dominant culture moved from Europe to North America, he was able to immerse himself in the Roman brick structures of the great classical buildings, interpreting the timeless forms of antiquity. When the glass curtain of the bureaucratic International Style became trivialized, he turned to the archaic sources of architecture to discover light, matter and desire, in the pyramids of Gis. or in the ruins of the Caracalla Baths. Kahn is a unique case in the history of 20th-century architecture: he introduced the question of monumentality, a matter heretical to the Modern Movement, and emphasized the value of permanence, and the tectonic character and materiality of constructive elements. He was able to read History creatively, interpreting the permanent value of the monuments for the community and rescuing their public sense of place. Posing questions such as “what do you want, brick?” or “does the inside of a column contain a promise?”, he produced an impressive body of work and a doctrine with originality, often appearing philosophical, poetic or even mystical. Moving away from dogmas, but never losing the functional and constructive sense of modulation, he broke the systematic use of fluid space and reintroduced a sense of ritual and the value of solemnity, while achieving the most suggestive syntheses between modernity and tradition, as Otávio Paz recognized, between the use of technique and memory.

Louis Isadore Kahn was born on 1901 on the Baltic island of Osel which, at that time, was part of Russia (now Saarema, Estonia). He grew up in the bosom of a Jewish family who emigrated in 1905 to the USA, settling in Philadelphia. When he was 3, an accident disfigured his face and hands. At 5, scarlet fever changed his voice, delaying his starting school, and determining a special destiny in a precarious family context. Kahn chose to be a painter, but his fascination for architectural history led him to enrol in architecture. In 1928, 4 years after graduating, he travelled for a year in Europe, drawing the temples of Antiquity. In 1950 he returned to Italy, beginning what would become a new cycle in his life: the period of growing glory that nurtured him until 1974, the year of his death. In fact, he had lived for 50 years and worked for about 25 when he finally found fame, with the Yale Center for British Art.

This DJ reveals the cross-section of subjects that restoration raises in Kahn works. From houses to facilities, from public authorities to private owners, from America to Israel or India, written contributions demonstrate how his buildings have proven their resilience and character.

I wish to thank David Fixler for being such a dedicated and committed guest editor, the authors for having shared their remarkable experiences in the restoration work, and William Whitaker and David Brownlee for the interviews that complete this Journal with their unique insights. Very special thanks must be given to the Architectural Archives of the University of Pennsylvania, for having graciously shared precious iconography and, in that context, once again to William Whitaker who daily “watches over” the Louis I. Kahn Collection, with more than 200 projects, 6,363 drawings, 29,813 working drawings, 100 models, 12,140 photographs, correspondence, a personal library and awards. In fact, the essential revision of Kahn’s work and theories was made two decades ago, when the investigation carried out from this monumental archive resulted in the exhibition that travelled between 1991 and 1994 to 7 museums in America, Europe and Asia, and the magnificent In the Realm of Architecture that constitutes the work of reference to understand the work and the man, that has been completed since then (see exhibitions and book reviews section). Finally, a special thanks to GCI, for their support to this journal, to Yale Center for British Art directors’ Amy Meyers and Cecie Clement, and to docomomo US/Philadelphia and friends who conducted visits on Kahn buildings: Bianca Sforni, Bryn Mawr, Charles Firmin-Didot, Dan Macey, Larry Korman, Maureen Ward and Paul Savidge.

After more than a half-century of use, it is deeply gratifying that society is still able to testify to Kahn’s knowledge and built heritage, renovated by some of the most skilled architectural offices, and can still rediscover the intensity of its poetics, where the transcendence of architecture is perpetuated with power, beauty and plenitude.”

INTRODUCTION
Kahn´s Modernism and its Renewal
BY DAVID N. FIXLER

What Decides “Heritage”? Lessons from a Comparison of Louis Kahn´s Commercial and Institutional Projects
BY LLOYD L. DESBRISAY

Managing Expectations — Contemporary Design Culture, Conservation and the Transformation of The Richards Laboratories
BY DAVID FIXLER

With the Help of Nature: Kahn, the Wood House and the Culture of Stewardship
ANDREW FEARON

The Yale Center for British Art: a Building Conservation
BY GEORGE KNIGHT

Preservation, Restoration and Upgrade of the Indian Institute of Management in Ahmedabad, India
BY BRINDA SOMAYA