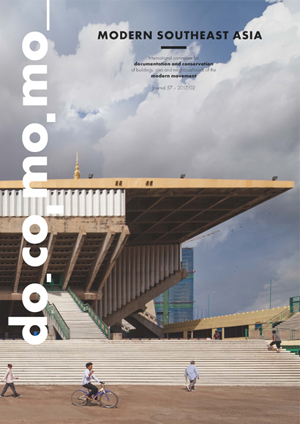 Nation Building and Modern Architecture in Malaysia By Nor Hayati Hussain

Following the challenges traced by the mASEANa Project (2015-2020)[1], with the collaboration of docomomo International, the aim of this DJ is to discuss the Modern Movement in the Southeast Asian countries [Cambodia, Indonesia, Malaysia, Myanmar, Philippines, Singapore, Thailand, Vietnam], addressing the course of the built environment and architectural development of each country, through its practice and discourse.

Coming from a common goal of preserving and promoting a sustainable future, a platform has been created to discuss documentation, conservation and reuse of modern architecture based on three main concepts: regeneration, equality and openness. Regeneration by, through training and education, involving the younger generations in the process of recognition and conservation. Equality, based on the respect for difference
with no imposition of ideas or methodologies. Openness by promoting exchange through thoughtful cooperation.

Although ASEAN is coming to be united in terms of politics, economy and culture, the background of its member countries is varied, having experienced diverse European colonization. In an increasingly global world, these nations are facing changes in the significance of their colonial past in relation to the postcolonial present. Between identity and nationalist demand, local knowledge and universal education, modern materials and
tropical climate, different architectural discourses have been produced showing that the most interesting way to approach the postcolonial issue is through the idea of exchange[2].

One of the most central questions in the debate on modernity has been the tension between a pretentious universality of the scientific-technological rationality of a so-called international format and the specific particularities of places and traditions. The homogenizing effects or the threat of the old over the new have informed different discourses on values such as authenticity, regionalism or identity[3]. In parallel, the history of Modern Movement architecture has been written from a Eurocentric perspective although deeper studies on concepts such as hybrid or the otherness have recently promoted a nuanced analysis on architecture and politics beyond the Eurocentric framework.

In fact, the mAAN declaration (2001) stated that “Modern Asia has not developed in a vacuum but has evolved through sustained interactions with the West, which has had a constant presence in our collective consciousness. The history of dealing with the West, with our [their] neighbors and with ourselves [themselves], is manifested in the myriad forms of our [their] architecture. The history of modern architecture in Asia is the history of how Asians have become modern”. Modernity is envisaged as a process of modernization which stands, as J. Widodo sustains, “when the spirit of freedom, progress and innovation flourishes”[4]. In postcolonial circumstances “the discourse on the tropics reached a pivotal point when it coincided with the success of the modern architecture turning global and adapting to suit all climate and cultures”5. The promise of a sustainable world based on urban regeneration future has a lot to do with S. Muramatsu’s theory on using natural and cultural resources to fulfill the “heritage butterfly”[6]. As one of the first efforts to develop a common understanding of the architectural
development in the Southeast Asia, this DJ reveals the most upto-date research on modern heritage in the different countries. The aim is to challenge initiatives as the mASEANa Project to keep working towards the preservation of this legacy for future generations, “dealing with issues common to everyone in a way
that might transcend national borders in the future”[7].

Docomomo is grateful to Shin Muramatsu, Setiadi Sopandi, Yoshiyuki Yamana and Johannes Widodo for being guest editors of this issue. Their commitment and energy which was shared by the authors’ who collaborated generously with their knowledge and dedicated work. A special mention must be made as well to Fumihiko Maki who gave us his wise insights through a unique interview. The Olympic National Sports Complex, Phnom Penh, on the cover, pays homage to Vann Molyvann, who passed away this September at 99 years old. Finally, docomomo remembers Ruy Jervis d’Athouguia born in Macau 100 years ago.

By Ana Tostões and Zara Ferreira