DOCOMOMO JOURNAL 56: The Heritage of Mies 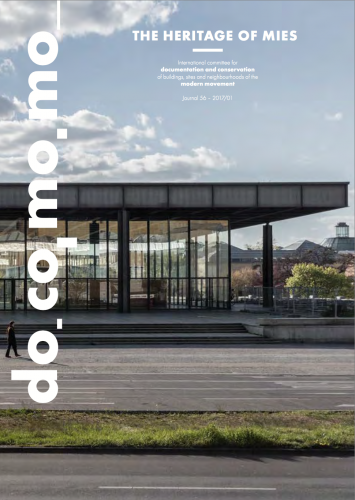 Baukunst and Zeitwille between Europe and America

“As a tribute to Mies Van der Rohe (Aachen, 1886-Chicago, 1969) around the time of the celebrations of his 130th anniversary, this issue of the docomomo Journal focuses on his legacy. As Fritz Neumeyer stated in 1986, “the effort to establish a philosophical foundation for building in the age of technology makes Mies’s statements important witnesses to a period of historical transition, whose importance has been unimpaired by the passage of half a century”. Mies enjoyed great prominence in Europe and America. Starting in Europe, his first incursions resulted in the German Pavilion for the Barcelona International Exhibition (1929), the Tugendhat House (1930) and the Krefeld silk factory andhouses. The Illinois Institute of Technology (1943-1957), the Lake Shore Drive (1951), the Farnsworth House (1951), the Seagram building (1958) and the Toronto-Dominion Centre (1969), bear witness to his work in North America. Back in Berlin, the Neue Nationalgalerie (1968) testifies to the sublime and perfect achievement of his path towards Baukunst and Zeitwille. These ideas, which one may translate, respectively, as the art of building and the will of the time, are anchored in Mies’s belief that architecture should be “metaphysically charged with creative life force” (Neumeyer, 1986). This led him to the modern achievement of developing a new kind of freedom of movement in space, following his sense of order (Blake, 1964) and his very unique conception of urban space (Lambert, 1994, 2013).

After more than half a century of use, the rehabilitation of these works forms part of the architectural contemporary agenda. Not only are these buildings still a magnificent source of inspiration, but their resilience has also underlined their capacity for remaining up-to-date, backed by the collaborative efforts of some of the most skilled architects and architectural offices. Many buildings could be featured in this issue, but a selection has had to be made; from Europe and the USA, docomomo International is pleased to present both recently completed and ongoing rehabilitation processes, from a cycle that started with Mark Sexton’s keynote lecture to the 13th International docomomo Conference (2014, Seoul), on the restoration works being undertaken on the Crown Hall. This lecture was developed in even greater depth and became an inspirational paper for this journal. Since then, in recognising the importance of the academic research conducted by the team of Christian Raabe, Daniel Lohmann and Norbert Hanenberg, at the Rheinisch-Westfälische Technische Hochschule (RWTH) Aachen University, namely the studies developed within the restoration of the Krefeld Verseidag silk factory, it has become clear that this is now the time to analyse the question of the preservation of Mies architectural works. With the aim of providing a broad overview of recent and current activities relating to the legacy of Mies, this issue publishes new research undertaken into the early years in his hometown Aachen, as new actions linked to the Krefeld Golf Club and into the context surrounding the German Pavilion design. The reproduction of drawings kept in the archive of the New York Museum of Modern Art (MoMA) was crucial in providing fresh insights. The participation of several members of docomomo in THICOM reveals the discussion process within the Tugendhat House restoration. The contemporary challenges facing architecture and construction are also analysed in the context of the restoration of the God Box chapel and finally under the scope of the refurbishment of the Neue Nationalgalerie by David Chipperfield Architects, conducted by Martin Reichert at his Berlin office.

I wish to thank the guest editors for their generous work, the authors for sharing their knowledge, practice, reflections and research, and finally the Krefeld-based Interface Company and the Mies Society for their special support. A special word of thanks is also due to Fritz Neumeyer, who generously agreed to share his thoughts on the legacy of Mies through an enlightening interview. With permanently fresh insights, Neumeyer promotes intellectual links to both classical and contemporary discourses, bringing to the fore the works of Behrens, Shinkel and Gilly.

docomomo is proud to join in the 2016 celebrations on Mies van der Rohe, such as the exhibitions in Herleen or at the Ludwig Forum in Aachen, followed by the 30th anniversary of the reconstruction of the German Pavilion in Barcelona, and most recently the Circling the Square exhibition at the RIBA. By embarking on this journey through Mies’s experiences of Baukunst and Zeitwille, this journal seeks to pay tribute to the timelessness of his legacy.”

By Ana Tostões and Zara Ferreira

“Zur Neuen Welt” — Towards the New World. Ludwig Mies and his Architectural Youth in Aachen
BY MAIKE SCHOLZ, DANIEL LOHMANN

The Re-birth of the Tugendhat House
BY ANA TOSTÕES, IVO HAMMER, ZARA FERREIRA

The Sequence of Mies van der Rohe in Barcelona: the German Pavilion as Part of a much Larger Industrial Presence
BY LAURA MARTINEZ DE GUERENÌƒU

The Neue Nationalgalerie: the Refurbishment of a Modern Monument
BY MARTIJN JASPERS