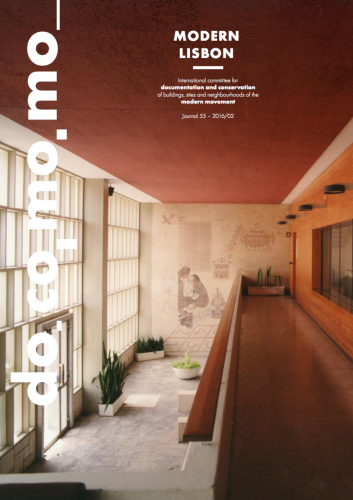 As a tribute to Lisbon, where the 14th International docomomo Conference – “Adaptive Re-use. The Modern MovementTowards the Future” took place, the argument of this 55th docomomo Journal is Modern Lisbon.

In the words of José-Augusto França, Lisbon “is the last of the old European cities and the first of the modern cities”, asconfirmed by the 1758 Baixa Pombalina plan undertaken for the reconstruction of the city destroyed by the 1755 earthquake, as a pioneering example of modern urban planning.

Following the avant-garde plan, modern architecture in Portugal may be envisaged through three main moments [1] according to specific policies undertaken during the long Estado Novo dictatorship (1926–1974).

The architects born between 1896 and 1898 began to explore the formal potentialities of reinforced concrete without theMoMo ideological component. Their works coincide with the determinant era of public works. Through the action of Duarte Pacheco, from 1933, Lisbon witnessed a great modernization visible in a large number of key projects: the bridge over the river, the Monsanto park, the marginal Lisbon-Cascais, social neighborhoods and facilities such as hospitals, schools, stadiums, the airport, maritime stations, and the Instituto Superior Técnico, considered the first great modern public work, as the paradigm that took architecture to the scale of the city.

In the postwar period, the premises of the Modern Movement, referenced to Le Corbusier and the expressionism of modern Brazilian architecture, were adopted in an ethical and ideological way, integrating the social responsibility of architecture. It was the rebellious moment when MoMo architecture was globally embraced. The 1st National Congress of Architecture(1948) revealed the new concerns of architects demanding industrialization, their participation in solving the housing problem and the right to participate at the city scale. Architects organized themselves into groups united by common ideals, with the awareness that only a collective work could be effective. ICAT (Cultural and Artistic Initiatives) was created in 1946, around Keil do Amaral, and the magazine Arquitectura was renewed as an instrument for the dissemination of what was being produced in the world.

The Alvalade neighborhood, a municipal initiative within a plan by Faria da Costa, was the opportunity for the new generation to propose the first rationalist experiences applying the principles of the Charter of Athens, such as to the set of VáVá and the Estados Unidos da América Avenue and the Infante Santo Avenue buildings.

The first major social housing undertaking in Lisbon was in Olivais, following the spirit of the English New Towns. Significant for the experimental concepts used as the basis of a modern project, it was the laboratory of an enlightened modern attitude that prolonged the quality of urban values at the scale of architecture. The Master Plan for Chelas (1964) marks the revision of the principles of modern planning.

By the mid-1950s, the moment was of reflection, beginning a process of searching for local references, which would lead to organicist and critical regionalist explorations simultaneously with the Survey on Portuguese Regional Architecture undertaken in 1955 (published in 1961). If this attitude revealed the contradictions and the crisis that the Modern Movement was going through in the international context of the last CIAM, it pointed out the integrating wisdom that seems to be a constant in Portuguese architecture. In this framework, the studio of Nuno Teotónio Pereira worked as the most important space for debate and teamwork through which the most consistent authors of the following generations passed. We wish to pay tribute to Nuno Teotónio Pereira (1922–2016) through recalling its Bloco das Águas Livres in this DJ cover, one of his major works which was published in the last DJ 54.

Finally, we wish to thank the wise commitment of João Belo Rodeia who acted as guest editor. As well, the authors, who generously shared their research, and the leading Lisbon figures (politicians, architects, historians) who agreed to discuss with DJ, in order to provide a comprehensive interpretation of the current city.

Lisbon is the locus of sustainable multi-functional urban developments and architectural preservation, beginning to be considered as one of the most important cities in terms of arts and technology development. The theme of the 2016 International docomomo Workshop, envisaging the integration of 21st century industries with a 20th century industrial complex, reveals the capacity of the city to grow and adapt itself into the future, in a creative way.

An Intangible Heritage in Use. Portuguese Institute of Oncology
BY DANIELA ARNAUT

Ruy Jervis d´Athouguia. A Modern Architect in the Garden-City
BY RICARDO CARVALHO

Brutalism and Nature. The Gulbenkian Foundation Buildings (1959–1969)
BY ANA TOSTÕES

Revisiting Chelas. In Search of the Promised Urbanness
BY TERESA V. HEITOR