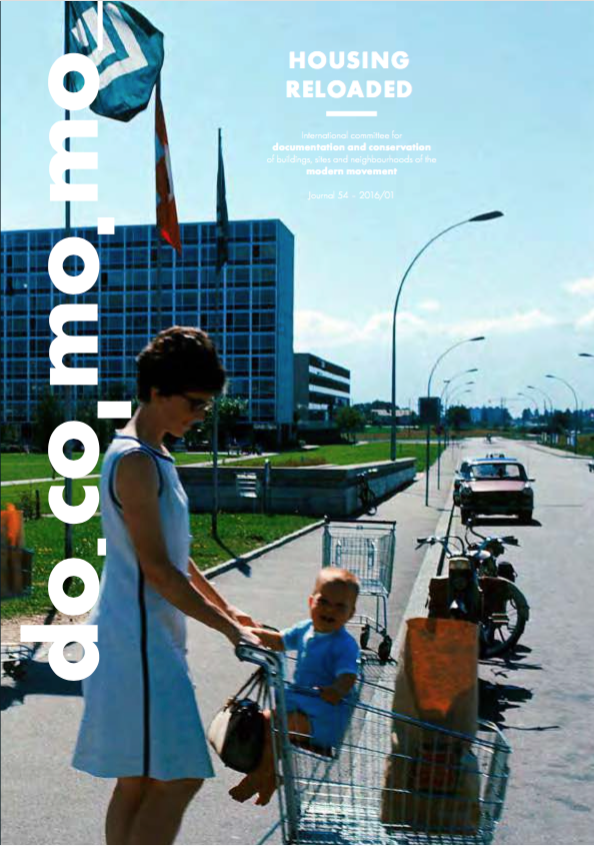 The theme of this 54th docomomo Journal is Housing Reloaded facing Post-War Housing Complexes in Europe The debate focuses on the challenges and strategies that have been encountered in efforts to preserve collective housing in Europe, seen as a major issue in the contemporary agenda. Symbols of architectural, technological and social aspirations, these grands ensembles of Mass Housing have nowadays begun to be appreciated by users and authorities, as integral part of the current city. Whether discussing demolition (as faced by the Smithsons´ Robin Hood Gardens and Toulouse´s Le Mirail, and commonly seen as a focus for social marginalization), or the growing phenomenon of heritagization (as implicit in the type of person now using the Marseille Unité d’Habitation), the debate today has mainly become centred on the question of: how to keep these large structures alive, while meeting contemporary standards of comfort? Characterized by adventurous experiments in the use of new materials and techniques, space creation and gender transformations, the obsolescence of these big complexes is determined on two different levels: the technical one (regarding comfort, such as thermal or acoustic, and the need for mechanical and safety improvements, as infrastructures, systems, elevators), and the functional one (involving space dimensions, organisation, orientation, and the introduction of new uses); all while complying with current regulatory standards. In addition, these buildings have frequently been intensively used and modified.

After the 3 R’s discussion (Tostões, DJ 52, 2015) on Asia and America, the aim is to address this type of question, and consider the large variety of strategies presented in this issue concerning experiences developed mainly in Switzerland, but also in France, Italy, Belgium and Portugal. We believe that this issue deserves an in-depth approach, considering Northern and Eastern Europe to be pointed out in a next DJ issue.

We wish to thank Franz Graf and Giulia Marino, for accepting the challenge to be guest editors of this DJ. Due to their painstaking and rigorous work, and to the skills of the experts who contributed with their knowledge and experience, it is possible to present this Journal, addressing such an important question.

In particular, the research conducted at TSAM — Laboratory of Techniques and Preservation of Modern Architecture, at EPFLausanne, deserves to be mentioned as an exceptional experience. Combining theoretical knowledge and technical know-how, the laboratory develops strategies for the preservation of modern architecture, including maintenance, conservation, restoration, rehabilitation, restructuring, redeployment and extension. This is exemplified in the rehabilitation plan developed for the Cité du Lignon (2008–2011) (DJ 44, 2011), which was distinguished with the Europa Nostra (2013) and SIA Awards (2014), and in the preservation process conducted at Miremont-Le-Crêt. With a not-so-happy ending, it is told the story of the Cité de L’Etoile, caught between indiscriminate demolitions and restoration efforts. Representing an important turning point in attitudes to post-WW II housing, is the case of Corviale, which had always been seen as a symbol of social failure among large-scale housing in Europe, and which now is starting to be admired and gathering support for its preservation. The evolution of doctrines on modern architecture conservation is revealed on the story of restoration conducted over the years on the iconic Marseille Unité d’Habitation, while Bloco das Águas Livres shows how different rehabilitation approaches can be addressed inside the same building. The challenges presented by modern prefabrication systems in rehabilitation processes are explored in the “EH, Evolutionary Building” prototype housing and in the Ieder Zijn Huis. Finally, landscape is presented as an approach that cannot recommend a heritagization perspective, since it is constantly changing.

The Documentation Issues section presents the amazing story of the re-birth of the Cercle de L’Ermitage in Epesses. It tells how it was possible to rediscover Sartoris´ original design, through research that managed to clarify different layers in time, functions and works of alteration. Some thoughts on conservation and museography are also discussed through André Wogenscky and Marta Pan´s House Workshop.

The need to develop sustainable sites, neighbourhoods and landscapes is one of the main issues for the 21st century. Postwar collective housing remains one of the most significant modern products representing efforts to develop architecture as a vehicle for an egalitarian society and where thousands of people still live today. The proper rehabilitation of these structures, while addressing the demands of the contemporary agenda, would represent a tremendous potential achievement, in an overall context of economic, social and environmental sustainability.