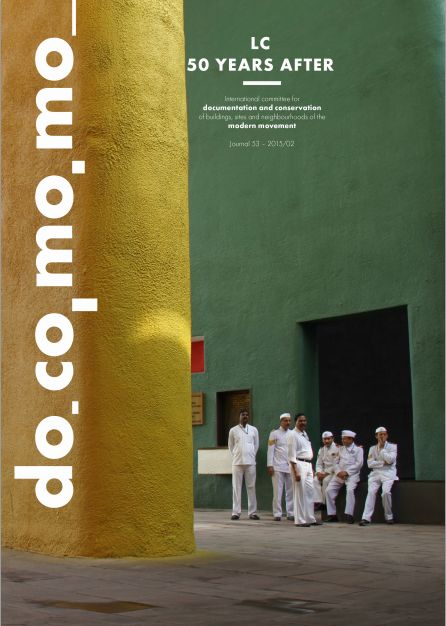 Essays:
The Role of the Fondation Le Corbusier in the Conservation of the Le Corbusier s Architectural Work — BY BÉNÉDICTE GANDINI AND MICHEL RICHARD
Restoration of the Petite Maison, Corseaux, 1924, Le Corbusier and Pierre Jeanneret. Construction Practice as Research — BY FRANZ GRAF AND GIULIA MARINO
The villa Le Lac by Le Corbusier and Pierre Jeanneret at Corseaux-sous-Vevey. The Color Rediscovered — BY ELISE KOERING
Maison Curutchet, La Plata, Argentina — BY JORGE NÉSTOR BOZZANO AND JULIO SANTANA
La Villa Savoye after Le Corbusier, une Longue Histoire — BY SUSANNA CACCIA GHERARDINI AND CARLO OLMO
The Restoration of the Paintings of Le Corbusier in the Villa E-1027, Roquebrune-Cap-Martin, Alpes Maritimes — BY MARIE5ODILE HUBERT
Renovation and Restructuring the Cité de Refuge by Le Corbusier and Pierre Jeanneret. Preserving the Dual Functional and Architectural Identity of the Masterpiece — BY GILLES RAGOT
The Couvent de La Tourette from 1960 to the present day. Future Discernibility of Past Interventions —  BY ROBERTA GRIGNOLO
National Museum of Western Art as Important Cultural Property of Japan: its Evolution and Historical Value —  BY YOSHIYUKI YAMANA AND KYO FUKUDA

LC prolific personality as theorist, painter, sculptor, architect, urban planner, researcher, disseminator, thinker, and provocative activist, helped to make him a universal author. His dual and inseparable theoretical and practical activities represented a source for LC´s balanced inspirational and systematic method. Envisaging “la planète comme chantier” (1), LC drove his obsessive constructive impulse around the whole world, to nations such as Japan, Russia, Argentina and India. Thinking deeply about the human condition in the contemporary age, he looked for solutions to solve social, technical and spatial problems, believing that architecture could have the power to improve the world. To the question “architecture or revolution?” he answered “revolution can be avoided” (2) through modern architecture.

50 years later, Le Corbusier still creates controversy,passion, discussion and intellectual stimulus, confirming the endurance of his long life energy, spirit and legacy. Through time and space, proportion and matter, his architecture is in fact a “wise, correct and magnificent play of volumes gathered under light” (3) crystallizing a vision of the world as an “espace indicible” (4). Nowadays, several of LC’s buildings are under threat. This issue of docomomo Journal presents a large variety of interventions and approaches, showing the cross-section of issues that Le Corbusier’s work raises in the restoration of Modern Architecture.

From houses to facilities, from Europe to Asia or America, from public authorities to private owners, these buildings have stood the test of time, proving their resilience and character. I wish to thank Bénédicte Gandini, Michel Richard, and the FLC, for accepting the challenge to be the guest editors of this issue and to share with us the “transnational” importance of Le Corbusier, through the analyzes conducted by a exceptional range of experts.

docomomo International wishes to stress the importanceof the FLC in disseminating LC´s ideas and preserving his work. Besides being responsible for keeping alive LC’s knowledge and spirit, and gathering precious archives consulted on a daily basis by researchers worldwide, the FLC is carrying out a most important task: the proposed inclusion of “LC architectural work of Le Corbusier [as] anoutstanding contribution to the Modern Movement” in the UNESCO World Heritage List (WHL). Envisaged as cultural property, it is a transnational application that brings together the nations of Argentina, Belgium, France, India, Japan and Switzerland at the World Heritage Convention. The aim is to fight for recognition of the buildings and sites constructed by Le Corbusier worldwide as exceptional and as milestones of the Modern Movement that influenced the practice of architecture everywhere. After many well-founded efforts over 50 years, for recognition of the vital nature of LC’s legacy, the WHL candidacy is still waiting for final positive results. As stated at the 12th docomomo Council Meeting (Helsinki, 2012), “docomomo International confirms the outstanding universal value of architectural works by Le Corbusier and supports a serial nomination in the World’s Heritage List”. Therefore, we believe that the conclusion of the recognition process is urgent, as we all know that it will also guarantee the protection of invaluable architectural ensembles, as in the case of the perfectly balanced Capitol Complex in Chandigarh which is under threat (see p. 84).

Quoting Tim Benton, LC with exigent and permanent criticism “was somebody capable of renewing himself atevery moment, [believing] in the universal value of architecture” (5). Today, we could reformulate this universal valueas the urgency to strive towards a sustainable future. That´s why docomomo chose “Adaptive Reuse: The Modern Movement towards the Future” as the main topic for the 14th International docomomoConference that will take place in Lisbon from the 6th to the 9th September 2016, in order to pursuit the Modern Movement’s social and collective project engaged with the challenge of creating a better place to live in an ever faster changing world.