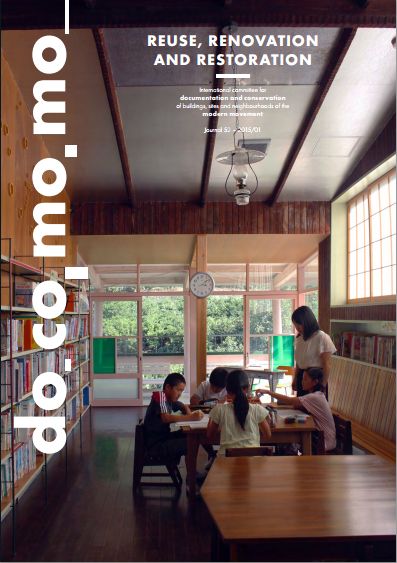 Editorial:
Reuse, Renovation and Restoration (the 3 R’s) — BY ANA TOSTÕES

Lecture:
The Legacy of Mies van der Rohe in Modern Movement and the Modern Architecture in Korea — BY JONG SOUNG KIMM

Essays:
Reuse, Transformation and Restoration — BY HUBERT-JAN HENKET
When the Oppressive New and the Vulnerable Old Meet; a Plea for Sustainable Modernity — BY HUBERT-JAN HENKET
Conservation and Renovation Project of Hizuchi Elementary School: First Challenge to Treat a Post-war Wooden Architecture as a Cultural Property — BY YOSHIAKI HANADA
Luis Barragán’s House in Pedregal. A Successful Restoration — BY LOUISE NOELLE
Conversion of the Church of Sainte-Germaine-Cousin Reaching out to the Community — BY MARIE-DINA SALVIONE
Progress Report on the Musashi-Ranzan Country Club Clubhouse Conservation and Repair Work —BY MITSURU HIRAI
A New Future for the Montréal Mies Gaz Station — BY FRANCE VAN LAETHEM
Preservation and Restoration of the International House of Japan — BY MASAMI KOBAYASHI
Reuse and Transformation of a Modern Movement Masterpiece: UN-CEPAL-ECLAC Building, Santiago de Chile — BY HORACIO TORRENT
Efforts to Improve the Earthquake Resistance of the Kagawa Prefectural Government Office East Building — BY KEIZO HAMADA

Documentation issues:
Modern Architecture in the Promotion of National Tourism, the Cap Ducal, an Emblematic Work in Viña del Mar — BY MACARENA CORTÉS
The Question of Auckland’s Civic Building —BY JULIA GATLEY
Modern Architecture in Setif (Algeria, 1930–1962). Expression of a Plurality of Approaches — BY SAMAÏBOUA DJA DJA SETIF AND SAÏD MAZOUZ

The theme of this 52nd docomomo Journal is Reuse, Renovation and Restoration. The aim is to discuss approaches of intervening in Modern Movement architecture, revealing exemplar processes that go from restoration and renovation to deeper transformations and reuse interventions. The goal is to answer one of docomomo’s main tasks: how to formulate new ideas for the future of the built environment based on past experiences of the Modern Movement.

The Modern Movement has demonstrated its long term legitimacy, as a concept endowed with an extraordinary and lasting longevity. Either way, it becomes increasingly important to acknowledge and value this heritage, in order to enable a skilled, informed and enlightened intervention. Such matters as materials and technology reuse, spatial and functional transformations as well as updating legislation, are part of the contemporary agenda. Knowing that many modern architects sought new heights of functionality and changeability, the challenge for today is how to deal with the heritage in relation to its continuously changing context, physical, economic and functional, as well as socio-cultural, political and scientific. I consider that the reuse project is starting to “make history” and I share the idea that heritage transforms itself with us. Therefore, modern architecture canbe a resource that asks for our attention in terms of quality, economy and sustainability. It was based on this broad meaning of reuse that Hubert-Jan Henket and I established the ISC/Sustainability. Deeply grounded by the Essay “When the Oppressive New and the Vulnerable Old Meet” by Hubert-Jan Henket, we invite you to “Join Our Plea for SustainableModernity”! (See p. 11).

I wish to thank Hubert-Jan Henket who has accepted to write the introduction to this edition of the docomomoJournal, using his wide knowledge on the reuse concepts, which contains contributions from a broad range of experts who contribute their knowledge and dedicated work. It is with great pleasure that we present this Journal. A large variety of intervention types and points-of-view are presented, showing the cross-section of subjects that restoration and reuse of MoMo architecture raises, worldwide: from Japan to Chile and Mexico, from Quebec to New Zealand. While cases of change of use are presented, such as the Church of Sainte-Germaine-Cousin (Gérard Notebaert,1962) and the Mies Gas Station (M.V.D. Rohe, 1968) in Montreal, other contributions document restoration projects whose main goal was to reproduce the original building as much as possible, such as the Country Club Clubhouse (T. Amano, 1961) near Tokyo, and a house by L. Barragán (1950), in Pedregal, contributing to the debate on the question of authenticity. In between, essays about the CEPAL Building (E. Duhart, 1960, in Chile), and the I.-House in Tokyo (K.Maekawa, J. Sakakura and J. Yoshimura, 1955) speak to usabout the different forces that could be involved in a processof preservation and how to find the balance between them. A project combining the updating of functional, social and technical requirements to current demands with fidelity to the principles of the original design, is the conservation and renovation of the Hizuchi E. School (M. Masatsune, 1958), internationally acknowledged by the WMF/Knoll ModernismPrize, in 2012. Finally, the Governor of Kagawa Prefecture, Mr. Keizo Hamada, shows us the efforts to improve the earthquake resistance of the Kagawa Prefectural Government Office (K. Tange, 1958), the struggle to gain the support and understanding of the prefecture, in order to pursue the best solution for the structural retrofit which is absolutely essential to preserve such a masterpiece for future generations.

The “Documentation Issue” chapter presents some examples dealing with the current struggle to use modern architecture, such as Cap Ducal, in Chile, which has been subjected to successive changes that ignore the potential of the original building and Auckland’s Civic Building which is scheduled for demolition due to its owner’s unwillingness to recognize its significance.

The contributions to this discussion combine modernity and modern heritage, economy and energy saving, the social mission and the responsibility of architects towards the future, relating themes to be discussed both as MoMo concepts, on a documentation level, and as MoMo intervention nowadays, on an intervention level.

The depth and the breadth of the subject have challenged docomomo International to host the 14th International docomomo Conference on the theme of Adaptive Reuse. This issue of the Journal and the International Seminar Rehabilitation and Reuse of MoMo Architecture that docomomo held in March2015, in Lisbon, are the starting points that will lead us to the 2016 conference! Both the seminar and the conference are being held in the Calouste Gulbenkian Foundation (architects: R. Athouguia, P. Cid, A. Pessoa, A. V. Barreto andG. R. Telles, 1969), in Lisbon, a MoMo masterpiece whose main auditorium was recently restored and renovated. I take this opportunity to invite you all to participate in the 14th International docomomoConference, in September 2016! The call for papers will be sent out in September 2015.