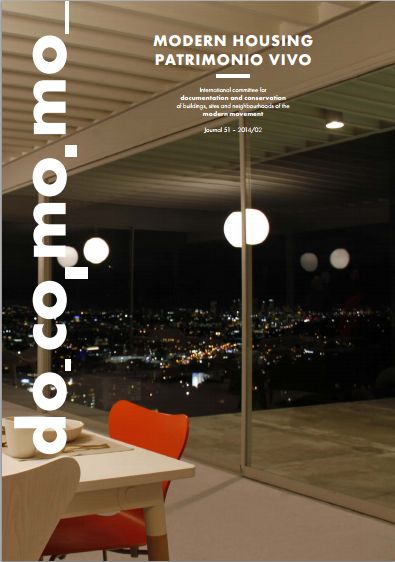 Editorial:
The House, the Home and the Housing Question — BY ANA TOSTÕES

Editorial:
The House, the Home and the Housing Question by Ana Tostões

This issue of the docomomo Journal is devoted to the theme of Housing — “housing” in its broadest meaning coveringmulti-family apartment buildings, single-family houses, privately-funded housing as well as government — and institution— funded social/public housing.

Housing is a central program in contemporary architectural production. Incorporating civilizing values of 19th century culture, the house arrives in the 20th century at the time notions of private space and domestic comfort come to the fore in Western Culture as values inseparable from the emergence of the family in domestic space: the home. In 1951 Martin Heidegger (1889–1976), in his Darmstader sprache, “Bauen, Wohnen, Denken”, relates the word building (bau) with theverb “to be” and the action of “being” (bin), to conclude that “dwelling is the fundamental trait of being, the mortals’ livingcondition.” Looking to reframe the sense of construction and to identify the meaning of “being”, Heidegger’s criticism is moved by the failure of the so-called rational materialist icsolution, and opens the discussion up to the re-evaluation of the design action as a unique, magical and creative action.

In the second half of the 19th century, with the Arts and Crafts movement, a process focused on finding comfort and a sense of intimacy and privacy in the dwelling is begun. Espoused by the vanguard of the early 19th century, housing became a tool of the ideological agenda of the modernity. The analysis of dwelling conditions implies an understanding ofthe occupation of space: related spaces, uses and functions. Addressing the act of living as a cultural fact, the house reflects the time and manner of its production. In its internal organization, the house responds to the mode of existence that the environment, culture and civilization suggest. Its design reveals the time and taste of the inhabitants, the family’shabits, and it offers many clues about the nature of social relations. The rapid changes in domestic architecture that followed the course of the 19th century have profoundly altered the boundary between public and private space.

Following Engels’ housing question (1872), the idea of ahome for all or, as it has been stated in the ‘60s, for the “greatest number”, addresses architecture practice at a political level, becoming to be understood as a determinant social factor.

With a new twist, modern homes brought to the debate themes of public and private life, intimacy, exposure and gender. The house, seen from the cell, the module, the system, and expanded across the city, constituted the fundamental issue debated within the architecture of the Modern Movement. CIAM discussion forums triggered profound consequences, both in the organization of the family house unit and of themulti-family housing blocks. The theory of the minimal house, based on the Existenzminimum concept, was present, not only in models for social housing, but also in the bourgeois houseprogram. It was Sigfried Giedion (1888–1968) who, in 1929,wrote about modern forms of housing showing the house’s “magic formula” for the future: light, air and openness whilelaunching, in the same year, the theme of CIAM II: “MinimumHousing.”

docomomo acknowledges the major relevance of reflectingon Modern Movement heritage, focusing on these mainissues: house and housing. As Joan Busquets argues “in thecourse of the 20th century, housing became a science due tothe huge efforts of progressive architects and their great interestin addressing this issue that had been raised with majorpolitical impact by Engels”.

I wish to thank Josep Maria Montaner and Zaida Muxiwho acted as guest editors for this issue of the Journal. Due to their commitment and research in the field, together with the knowledge of the range of researchers who agreed to share their work, and their analysis and creative interpretation that focused on some key architectural houses or housing complexes— from Barcelona’s innovative experiments to RobinHood Gardens’ symbolic destiny, social housing cases from Valencia to Bogotà, from Buenos Aires to São Paulo, and from cultural to technical or gender aspects — it is possible to extend this debate by reflecting on the link between design and housing, and the house and the home.

The challenge of considering sustainability as the urgent contemporary issue facing momo buildings and neighborhoods was reflected in the main docomomo forum discussions held during the 13th International docomomo Conferencein Seoul, South Korea, in September 2014. A resultof the discussions was the establishment of the docomomo ISC on Sustainability. Apposite to the emerging theme ofsustainability, the student workshop that preceded the Seoul conference comprised a design discussion on the future of Sewoon Arcade, the Seoul modern commercial and housingmega-structure recently threatened with destruction. Thanks to the efforts of many people the demolition has been avertedand a new, economically — and socially — sustainable life is now envisaged for this amazing structure.