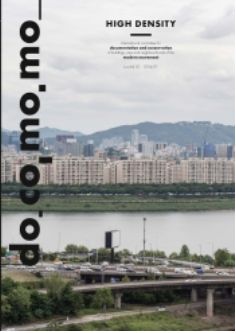 Editorial:
High Density and the Investigations in Collective Form by Ana Tostões

Introduction — BY EUI-SUNG YI
Converging Fragments. Seoul: A Portrait of a 21st Century City — BY PETER FERRETTO
Post-Global? Fantasy and Crisis during the First Decade of the Global Era — BY YOUNG MIN KOO
The Correlativity of Building Form and Urban Space: Swoo-Geun Kim’s Daehangno Projects in Seoul — BY INHA JUNG
Capital Production and Social Equity: Finding Balance in Chinese Cities — BY ANDREW LIANG
São Paulo: Urban Planning Efforts and Metropolitan Growth — BY RENATO ANELLI
The “Densification” of Modern Public Housing: Hong Kong and Singapore — BY MILES GLENDINNING
Flexibility in the Density. Metabolism: Freedom in a Large Complex –  BY SOUHEI IMAMURA
PREVI: The Metabolist’s first and only built Project — BY EUI-SUNG YI
Rereading Our Recent Past: Notes on Chandigarh and New Gourna — BY VINAYAK BHARNE

Editorial:
High Density and the Investigations in Collective Form by Ana Tostões

The argument of this 50th docomomo Journal is High Density. In other words, the goal is to discuss the great metropolis growing process on the scope of the Modern Movement concepts. Discussing the emerging Asian city and following the Investigations in Collective Form (1), this theme is the result of a challenge which is related to the impressive Asian cities high density created by the link between the buildings and the space within. This year of 2014, when docomomo major Conference is hosted at the MOCA, the National Museum of Modern and Contemporary Art, South Korea, the inspiring stimulus of Seoul amazing city and the “Expansion andConflict” conference motto are the starting point that justifies going deeper in the relationship that connects urban design and contemporary cities; the connection that stands between technology and human need.

The debates that followed the World Design Conference (WoDeCo, Tokyo, 1960) on the search for a “total image for the 20th Century” pointed out among worldwide designers, architects and planners, view points and intellectual ideas concerning the future of the city, particularly in the wake of technological and scientific advancement in industry. At the time of the WoDeCo, progressive architects formed the “Metabolism” group and proposed their concepts for dealing with the increasing complexity of the cities rising. Debating over the ideal city and promoting a kind of experimental architecture based on ideas of life styles and communities for a new era, its biological name suggests that buildings and cities should be designed in the same organic way that the material substance of a natural organism propagates adapting to its environment by changing its forms in rapid succession.

As Fumihiko Maki argues, searching for new formal concepts in contemporary cities lies in the magnitude of recent change due to the unprecedented rapid and extensive transformations in the physical structure of society, the rapid communications methods, the technological progress and its impact upon regional cultures: “we must see our society as a dynamic field of interrelated forces, a dynamic equilibrium […] which will change in character as time passes.” (2)

The plan turns program and the time dimension became one of the keys for the future. As Távora stated, afterparticipating at the WoDeCo in Tokyo, “everybody insists in the same idea: the necessity to create a link between theman and the technology regarding the formal matters.” (3)

Redefining collectivity implied that elements and linkages become designed with a contextual consideration. Finally,the concerns over the dramatically change in contemporary city has led us to face environmental questions, ecological requirements and sustainable needs as vital values to ensure. Starting this new cycle of our Journal signalizing the symbolic DJ50 plus 25 years of work when we settled the docomomo Headquarters in Lisbon, with the financial support of the Municipality, at the Técnico, Lisbon University (4),we wish to come to this important issue introducing the post Second World War dimension related to the future of our environment and the increase complexity todeal with it. The late CIAM discussions brought social and intensive public aspirations in order to develop strategic tools in making our physical environment. Fifty years ago, at WoDeCo the urban designers asked why, what and how we should design.

Therefore, in our days, between North and South, Eastand West, the aim is to deepen understand the process and to find the paths for the future. A future that we may create with such awareness that may, generously give us, the tools for increase nowadays architecture and city planning.

I wish to thank Eui-Sung Yi who, from the first moment, accepted to be guest editor of this new docomomo Journal. Due to his commitment and energy, and to the skill of awide range of experts that contribute with their knowledgeand dedicated work, it is with great pleasure that we present this Journal. A variety of disciplines and points of view represented by professionals and scholars, show the vitality of docomomo people’s network based in Asian cities, from South Korea to China, Japan to Hong Kong or Singapore,and promoting linkages to the great São Paulo megalopolisas well as to Chandigarh or New Gourna. And in that sense envisaging the meaning of habitat and the concept of high density, low rise. The question of meaningful collective forms is discussed using PREVI case study in Peru approaching its relationship with the metabolism emergent movement and the housing policies in Latin America. The statements of Fumihiko Maki and Peter Land make clear the process of making a comprehensive and humanly evocative urban environment.

As we all know Modern Movement main mission stands for the creation of a better world made with the active participation of architects and planners. For 25 years docomomo has been working for improving and enlighten the importance and innovation of the modern project. Since then, modernity has been addressed as a “worldheritage, and has been faced as a sustainable design tool, a project method, and finally, as being crucial to the future of architectural production and cultural debates.”(5) The “Absorbing Modernity: 1914-2014” Venice Biennale Architecture 2014 motto is the evidence of docomomo practice and theory relevance. We all know that architecture as a social production imposes a great responsibility on the architect. That’s why I wish to recall that today we live a time that requires, as Hubert-Jan Henket said, an “integrated effort of sciences, technology, arts and ethics”, in order to fulfill a better future “based on social, technological and cultural responsibility and innovation.”

Looking towards the future is also to remember the dearest friends that passed away. Therefore we honor the memory of our dear friend docomomo member, Professor Hiroyuki Suzuki (1945–2014).
Being the first docomomo Journal produced by the new International Secretariat settled in Tecnico-Lisbon University, and provided with facilities and working space, we wish to increase the quality and efficiency of our work and we invite all members to visit us in Lisbon.