DOCOMOMO JOURNAL 49: For an Architect´s Training 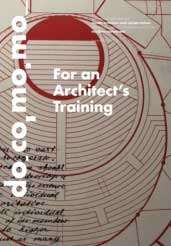 Editorial:
For an Architect´s Training Towards Responsibility – by Ana Tostões

Notes on Education and Research around Architecture – by Allen Cunningham

Phenomenon of the Russian Avant-garde. Moscow Architectural School of the 1920s – by Elena Ovsyannikova and Vladimir Shukhov

Ernesto N. Rogers and the CIAM: Teaching for Democracy – by Serena Maffioletti

Unity of Architectural Organism and Urban Form – by Alessandra Capuano

The Teaching of Architecture and Urbanism in Brazil: 1930–1970 – by Ana Maria Goes Monteiro

Critical Eclecticism. The Way(s) of the Porto School – by Eduardo Fernandes

The Beginning of the Beginning: Kahn and Architectural Education in Philadelphia – by David Leatherbarrow

Architectural Practice, Education and Research: on Learning from Cambridge – by Mário Krüger

Herman Hertzberger: an Interview on Education – by Gonçalo Canto Moniz

Editorial:
For an Architect´s Training Towards Responsibility – by Ana Tostões

The analysis of Modern architect’s training is the issue of this docomomo Journal. The variety of discussions on architects’ mission, on architectural discipline and the recall on some key figures explain the argument of this Journal entitled For an Architect’s Training. The title quotes Walter Gropius’ “Blueprint for an architect’s training” spread through the French magazine L’Architecture d’Aujourd’hui in February 1950 (number 28), dedicated to “Walter Gropius, the spread of an idea” and realized by Paul Rudolph under the direction of Gropius himself who developed his ideas on design education between art and technique, creation, research and applied science.

In this context emerges Joseph Hudnut, at the time Harvard University Dean of the Faculty of Design. In his Blueprint for a University (1944), Hudnut shaped the liaison between “our universities” and “the evolution of a new social order in our cities.” In fact, he advocates “a scientific attitude towards the problem thus created [by the immense industrial expansion] and the establishment of the intellectual forces in the effort to resolve them.

”Facing what he calls as the social disintegration, he considers that “living needs a pattern [and] a framework of social purpose.” docomomo acknowledges the major relevance of reflecting on the Modern Movement heritage focusing on two of the main issues: learning and responsibility. This duality between education and duty implies a collective attitude and a shared action. In fact, Hudnut “does not suggest that a social pattern can be created by an act of the individual will. It will be not invented. It will be the consequence of an evolutionary process [because] Planning is a term which includes both foresight and responsibility for change.” This responsibility towards the future implies “the sense of historicity and evolutionary identity” in the terms defended by Juhani Pallasmaa in his “Newness, Tradition and Identity” docomomo Lectures published in this Journal. Pallasmaa argues referring to Álvaro Siza’s conviction that “architects don’t invent anything, they transform reality.” Pallasmaa stands “the ground of culture” as a collective mental foundation taking into account that “the quick collapse of this collective mental foundation during the past decades is already a serious obstacle for education in the creative fields today.”

If Hudnut stands that “planning is a tool of social reconstruction”, Pallasmaa stands that “the primary task of architecture continues to be to defend and strengthen the wholeness and dignity of human life.” The tradition of Modern Movement architecture is envisioned as a large concept that deals with forms, spaces, techniques and social responsibility. The contributions on this discussion put together learning and training, scientific research and design practice, the social mission and the responsibility of architects towards the future considering that “Modernity is an unfinished business” as Allen Cunningham reminds us.

I wish to thank Gonçalo Canto Moniz who has acted as guest editor. Due to his commitment and research in the field, together with the knowledge conducted by a range of researchers that accept to share their work, analyse and creative interpretation focused on some architectural education key figures [from Kahn to Rogers, Muratori or Quaroni to Leslie Marin, from Hilberseimer to the Russian avant-garde or the Brazilian Modernity process to the alive vital experience of Herman Hertzberger] it is possible to extend this debate over the reflection on the link between design and science, art and technique. And finally it is also the challenge to discuss this urgent contemporary issue in order to prepare the coming main docomomo discussion forum in the believe that seeking for the planning and architectural responsible mission is a way to approach the “Expansion and Conflict” key concept of the 13th International docomomo Conference, which will take place in Seoul, Korea, from the 24th to the 27th September 2014.