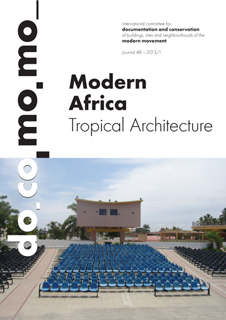 Ten Years After, the Continent oh Hope and Modern Heritage by Ana Tostões

Editorial
Ten Years After, the Continent oh Hope and Modern Heritage. A Tribute to Udo Kultermann by Ana Tostões

The argument of this Docomomo Journal is Modern Movement in Sub–Saharan Africa and Tropical Architecture. docomomo is very pleased to gather the reflection of a range of skilled researchers in this issue, becoming to point a huge critical attention. Ten numbers and ten years after docomomo Journal 38, dedicated to Modern Heritage in Africa, the aim of this number 48 is to update the discussion contributing to “fill the gaps” identified by Jane Drew (1911–1996) and Maxwell Fry (1899–1987).

The expression “Tropical architecture” is frequently associated to Fry and Drew, due to an international diffusion of Tropical Architecture in Humid Zones (1956), followed by Tropical Architecture in Dry and Humid Zones (1964). Far from European production, African colonies created new architecture giving shape to a brand, the one of tropical architecture: “architecture in the humid tropics is collaboration with nature to establish a new order in which human beings may live in harmony with their surroundings”. The idea was “to fill a gap in general information for architects and town planners”. Until then the edition was concentrated on French and British colonies.

1960 seems to be “the African year” coinciding with the peak of the beginning of the African decolonization process, following a post–war circumstance and the foundation of the United Nations Organization in 1945 (having a huge reverberation on changes made to statutes of several African regions that were being shared by European states since 1884, as decided at the Berlin Conference), with the independence of 17 countries and the beginning of rebellion towards independence all over the continent.

Published in 1963, the book Neues Bauen in Afrika, by the art historian Udo Kultermann (1927–2013), constitutes a reference on the analyses of Modern architecture in Africa, stating that the new task was to build new nations, implying a new evolution on African architecture. Six years later, New Directions in Africa Architecture points a path and a future by analyzing typologies, identifying trends and establishing conclusions. In the book published in 2000 World Architecture 1900–2000: A Critical Mosaic, he regains the 1963 chronological setting and selects 100 buildings to illustrate the 20th century in sub Saharan Africa, assuming the Sahara frontier and defining a sub Saharan cultural unity to built his idea of the “continent of hope”. Kulturmann’s progression emerges from optimism focusing on doubt in 1969 and on hope on the edge of the 20th century. Kulturmann’s approach by questioning the link between tradition and innovation on African architectural production has no precedents.

Since the 1990s architectural historians discovered Modern architecture in Africa as part of a cultural production related to colonialism. With the introduction of postcolonial theory in the historiography of architecture, an exclusively ideological critical sense has been developed preventing disciplinary autonomy or practice of architecture and finally condemning any objective look. Recently, the development of concepts such as hybrid or the otherness has been promoting a nuanced historical analysis about architecture and politics in the 20th century in Africa. The recognition that a widespread awareness of Modern Movement architecture has always been serving colonization involves rethinking the basic principle of Modern welfare society and practiced architecture as a mission. How Modern principles have been exchanged, resulting from a Eurocentric culture, with the cultures from the East and Africa. In addition, it must be said that the case of sub–Saharan Lusophone Africa is now beginning to be studied in depth putting together peripheral universes.

It is time to keep on debating African’s surprising Modernity and to reflect both on the lack of information, namely the one concerned with territories such as Angola or Mozambique, to re–evaluate the memory of the past, the present and the future with a wide range of issues dealing with documentation and conservation topics.

I wish to thank the skill of a brilliant range of researchers and critics that contributed to make possible this debate that starts with the acute reflexions on colonialism and orientalism conducted by Hilde Heynen. Antoni Folkers makes the necessary revision on the very early and native Modern African architecture; Ana Tostões deals with local culture and global influence highlighting the work of Pancho Guedes in Mozambique, introducing the Lusophone Africa which is followed by paradigmatic case studies analyzed in the scope of a heritage assessment by Margarida Quintã in Angola, Vincenzo Riso and Susana Gomes, followed by Zara Ferreira’s contribution on Mozambique school programs in Conservation Issues. Heritage conservation’s future is the question identified by Hannah Le Roux, Brendan Hart and Yasmin Mayat, followed by Ola Uduku who stresses the importance of education for the future of heritage. Finally, the tropical architectural education is analysed from two Mediterranean authors’—this is to say peripheral Europeans—point of views: Portugal and Greece, through Jorge Figueira/Bruno Gil and Petro Phokaides essay’s updating the AA School Tropical Architecture Program.

Today, I wish to remember Udo Kultermann who passed away last February and to pay a tribute to his unprecedented work: African’s architecture challenge, its current reality and its evolving process gathering together cultural heritage and the test of time. The case studies analyzed represent only a small example of African Modern architecture’s potential showing in the iconic, tectonic and programmatic qualities of this singular heritage. If one may admit that this legacy begins to be recognized as a cultural heritage, it is important to consider the fact that this astonishing universe faces a lack of legal protection. However, even carrying the fragility of more than a fifty year–old construction and minimal maintenance, these buildings and cities still show a surprising sort of resilience. Perhaps due to the fact that Modern Movement architecture that has been designed and conceived with great consistency and climatic conditions awareness shows a spatial and tectonic worthiness, which has enabled it to survive the test of time. It is important to understand this production envisaged through a transformation process following a truly progressive orientation and the cultural dissemination of these pioneering works with plenty of social and urban significance. As I believe that heritage implies a collective sense of belonging, I wish to enlighten the utopia vision of Modern Movement architecture as a step forward for the improvement towards a better life for all and considering that this heritage may turn into a sustainable, cultural and economic resource.