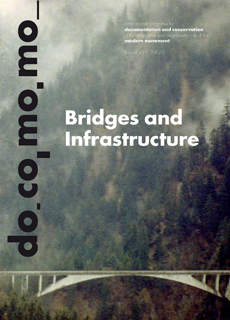 Essays:
Bridges and Infrastructure by Kyo Takenouchi and Ola Wedebrunn
Bridges of Modernity by Jürg Conzett
Robert Maillart’s Innovative Use of Concrete by Denis Zastavni
The Bridge Over the Lake: Spanning Across Lake Maracaibo in Venezuela by Hannia Gómez and Rino Montiel
The Work of Eugène Freyssinet: The Most Significant Bridges of his Career by Pierre Jartoux
Eduardo Torroja: The Alloz Aqueduct by Carlos García Vázquez
Structure and Form: The Theory of ‘Minimal Surfaces’ and the Bridge over the Basento River by Sergio Musmechi by Rinaldo Capomolla
Cable-Stayed Bridges: The Düsseldorf Bridge Family by Annette Bögle
Eïtai and Kiyosu Bridges over the Sumida: Japanese Bridge Design in the 1920s by Daijiro Kitagawa
Finding Modern Japanese Bridges: Stone, Wood and Steel by Norihide Imagawa and Shinsuke Suematsu
Cable Supported Bridges across Straits in Denmark by Niels Jørgen Gimsing
Sir Ove Arup: The Design of Bridges by Jørgen Nissen
Bridge of Dreams: The Penguin Pool, London Zoo by John Allan
Concrete’s Furthest North by Pétur H. Ármannsson
An Intriguing Work of Engineering and Architecture: The Collonnade Bridge in Piešt’any by Henrieta Moravcˇíková
Lincoln Park Passerelle: Rainbow Bridge by Tim Samuelson
Mizen Head Footbridge or ‘Building a Bridge, to Build a Bridge’ by Kieran Ruane
Bridging the Gap by Mari Hvattum

This docomomo Journal is dedicated to a reflection on Bridges and Infrastructures, envisaged as key structures for an enriched comprehension of Modern Movement.

The search on Bridges and Infrastructures has to do with a matter of connecting. To launch bridges seems to be a kind of life requirement, as far as it is the way to connect sides, which means improving relations and energies, desire and intelligence. Bridges and Infrastructures have the function of connecting pieces of land and the role of creating a connected world. The matter is to make links and establish a network. In fact, it is a global network made of works of art, which have a physical and material presence balancing between values such as economy and elegance and providing a better life for every man. Seeking audaciously for innovation, research contributes to these large scale structures as it has been improving material capacities and technical creation. It is a huge field that lay infinite possibili­ties for art and science to perceive changes of social, aesthetic, technical standards and norms, to quote Sir Ove Arup.

The search on Bridges and Infrastructures has to do with a matter of moving. Bridges and infrastructures are fantastic topics to make one go deeper on the reflection that moves us on the universe of Modern Movement. A process that we believe to be an open one, daily set up in accordance to the continuous transformation which is the very character of the modernization process. What Octavio Paz names as the modern tradition: a process of permanent transformation. Primarily, it has to do with mobility, transporta­tion, in a word: movement, with Space, Time and Architecture, to quote Giedion. Movement is the most precise (and simultaneously, the most ethereal: all that is solid melts in the air, stated Marx) to characterize the Modernity and the Modern Movement in response to the contemporary situation. In fact, the bridge does not define space, it organises space, space envisaged as the place where movement occurs, as a flow way of people, goods, energies, promoting movement and time acceleration. It is the aesthetics of mobility and an inspiration for Modern Movement architecture and its fascination for speed transformation infrastructures, in other words, for tangible and abstract architectural problems as referred to by E.Mock.

Finally, the search on Bridges and Infrastructures has to do with a matter of nature envisaging the landscape as an ongoing medium of exchange. Bridges and the large scale Infrastructures are a kind of an aesthetically sublime second nature, as Goethe claimed in his Italienische Reise. It is a route, a way, as well as a place and a work of art; it puts together practical devices and intense cultural symbols. A bridge of dreams as John Allan suggests, is made of the intuition and innovation desire remembered always by Freyssinet as a love without limits (un amour sans limite). Because one can see it is an aesthetic experience, beyond all the technical requirements that fixed the interaction between man and nature. The progress fulfilled through the Bridges and Infrastructures constitute the large and universal scale laboratories that have been fostering several micro scale solutions, procedures and technologies.

Due to the scientific commitment, the inexhaustible energy, the intense creativity of the guest editors, Kyo Takenouchi and Ola Wedebrunn, who accepted the challenge to work this issue, it was possible to put together a competent, brilliant and generous range of experts around this theme. In fact, the Bridges and Infrastructures issue came up to us as a brainstorm, as a bridge of desire that took place between Tokyo and Copenhagen. At the end of a year in which a violent earthquake and tsunami with devastating consequences occurred in Japan, docomomo is proud to present this Journal, which symbolically includes the report of docomomo Japan 150, future and legacy, the exhibition presented in September at the main Tokyo Subway Station, revealing how important it is for docomomo to be close to the public, how vital it is to use bridges and to connect people.