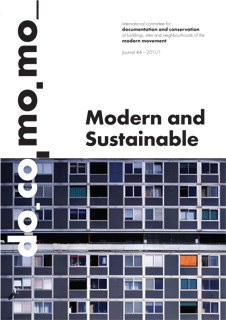 Essays:
The Modern Movement and Sustainability: Yesterday, Today and in the Future by Theodore Prudon
Greening Modernism by Carl Stein
Design with Climate in Africa. The World of Galleries, Brise–Soleil and Beta Windows by João Vieira Caldas
Modern and Green: Heritage, Energy, Economy by Franz Graf and Giulia Marino
Sustainability and Modernism: Design Research at Cornell NYC by Ilana Judah and Daniel Kaplan
The Tugendhat House: Between Artisan Tradition and Technological Innovation by Ivo Hammer
Inherited Toxicity: An Expanded Concept of Sustainability for Preservation by Amy Swift

Identified as a key issue for the future of environment, the argument of this docomomo Journal is Modern and Sustainable.

In fact, Modern Movement Architecture is envisioned as a concept that deals with forms, spaces, techniques and social responsibility. In this docomomo Journal, the contributions on this discussion put together modernity and Modern heritage, economy and energy saving, the social mission and the responsibility of architects towards the future.

Modern Movement is often mistakenly related to a style, perceived in a skin–deep point of view and superficially adopted as simple form, as a modern shape, when in fact Modern Movement has always shown great concern with such issues, seeking for eficiency and economy, i.e., an accurate use of mate­rials, a design approach that incorporates intelligent saving resources in order to create a better world.

This concept is nowadays synthesized in the so–called Sustainability, whose misuse might have lead sometimes to a trivialization of the word. That’s why the identified theme to focus on is Modern Movement as the absolute primacy of the process over the style, looking for quality of life. The de­vices created to be efficient according to place and climate, the reflection made on building physics, the relation between heritage, energy and economy, are themes to be discussed both as Modern Movement concepts, on a documentation level, and as Modern Movement intervention nowadays, on a conservation level. After all, ideals that move docomomo between documentation and conservation.

The aim is to contribute for the discussion that relates heritage, economic constraints and energy issues, gathered underneath a global strategy for the future in order to fullfill a Modern Movement purpose: a better life quality for all!

I wish to thank Theo Prudon who acted as guest editor of this “Modern and Sustainable” dossier. Due to his commitment, knowledge and know–how—acquired within a transversal framework as a practitioner architect, researcher and professor—and his clear–sighted capacity of synthesizing and finding solutions, together with the knowledge shared by a range of researchers, in connection with pioneer academic research on the subject carried out by Columbia, Cornell, École Polytechnique Fédérale in Lausanne, it is possible to extend this debate over the reflection on the creation itself and its durability, the tools created by Modern Movement architects to answer to efficiency and economy in a sustainable way.

Seeking sustainable solutions is also the way we choose to envisage the “Survival of Modern. From coffee cup to plan”, the main concept of the 12th International docomomo Conference which will take place in Espoo, Finland, from the 7th to the 10th August 2012. The Conference themes will range from Environment and Urban Space large scale to the discussion on creation and its consciously opera­tive conservation as Modern Heritage—the global design issue—and the relevance of furnishing in the adequacy of everyday environment space. These are certainly challenging issues that may support us, both undertaking an innovative conservation research and practice, and formulating new ideas for the future of the built environment based on the past experiences of Modern Movement Architecture as a condition for building a better future.