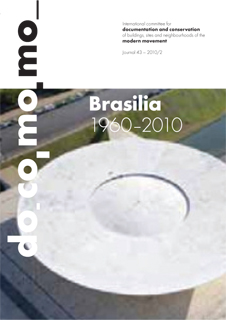 Essays:
Listing and Protecting the MoMo. Brazil/Brasilia – by Sylvia Ficher and Andrey Rosenthal Schlee
The Competition for Brasilia’s Pilot Plan: Territory and Infrastructure – by Jeferson Tavares
The Dislocation of Brazil’s Capital: a Long–Standing Project – by Farès El-Dahdah
Lúcio Costa and the Question of Monumentality in his Pilot Plan for Brasilia – by José Pessôa
Modern and Traditional: Brasilia’s Paradigms – by Sylvia Ficher and Pedro Paulo Palazzo
A Myth that Left the Greenhouse – by Hugo Segawa
Brasilia. Monumentality Issues – by Carlos Eduardo Comas
The Campus of the University of Brasilia – by Andrey Rosenthal Schlee
Foreign Architecture in Brasilia – by Sylvia Ficher and Paulo Roberto Alves dos Santos
Athos Bulcão and the Architecture of Brasilia – by Rafael Miura Bonazzi
The Restoration of the Alvorada Palace – by Hattie Hartman
Brasilia, the Palace of Congress and their Urban Changes – by Danilo Matoso Macedo and Elcio Gomes da Silva
The Itamaraty Palace in Brasilia – by Eduardo Pierrotti Rossetti

The argument of this docomomo Journal is Brasilia. We are very pleased to celebrate the 50–year anniversary.

Since Brasilia’s World Heritage inscription in 1987, the city has developed public awareness regarding the value of a major accomplishment in the history of urbanism. The singularity of Brasilia lies in its ability of being simultaneously rooted in the past while looking ahead to the future, envisioning an approach that should affirm Brazil’s industrialization effort and the need to provide access to life quality incorporating a specific genuine cultural tradition; an approach where the new capital should be the image of the homeland. Lúcio Costa, the architect who sensed and perceived the need to rescue architectural heritage, formulated unprecedented theoretical principles, articulating both realities. He was aware of the fact that modern architecture was a powerful means to foster a national identity because, according to modern principles argued in Brazil, a bond should exist between an erudite avant-garde and traditional popular features. Costa revealed the structural resemblance between raw architecture from the 18th century—the plain Portuguese style—and the new constructions, discovering the same logic, rationality, rigor and strictness.

In fact, the construction of the Modern Brazilian Architecture is part of a larger cultural process which links tradition and innovation. Like Le Corbusier’s Chandigarh, the Punjab new capital, Brasilia was built according to modern standards, evolving from a perfect articulation between the Pilot Plan conceived by Lúcio Costa, the main buildings designed by Niemeyer, the landscape idealized by Burle Marx, and finally, the public art sculptures created by various artists. The grand ideal of modern movement, the synthesis of art, was fulfilled by means of a symbiosis between architecture, urbanism, landscape and visual arts.

In the 21st of April 1960, the opening of Brasilia was celebrated as something far greater than the simple inauguration of a new capital. Brasilia acquires a great echo, as a symbol of national identity and progressive political program, that, at the time, has exceeded the disciplinary universe of architecture and urbanism. Actually, there was a sense of proud amongst all Brazilian people, as the new city sought to provide a better future and overall progress. The success of this new architecture surpassed regions, social classes and nations! Everyone embraced the modern architectural language: upper class people, constructors or even humble workers.

Today, 50 years after, it is time to debate Brasilia’s unprecedented modernity and to reflect both on the incomprehension of the critic and on the happiness of the inhabitants. It’s time, 10 years afterdocomomo Journal 23 concerned with “the Modern City Facing the Future”, to re-evaluate the memory of the past, the present and the future with a wide range of issues dealing with documentation and conservation topics. I wish to thank both Sylvia Ficher and Andrey Rosenthal Schlee who acted as guest editors of the Brasilia Dossier. Due to their knowledge and commitment, and the skill of a brilliant range of researchers, it is possible to extend this debate over Brasilia’s challenge as a modern movement universal ideal, its current reality and its evolving process: analyzing the competition process held in 1956 and presenting the proposals on an international context; reflecting on Brasilia’s contribution to the symbolic image and the new monumentality; presenting some case studies selected from the large scale buildings to the works of art dimension.

Facing the near future and searching for sustainable solutions, it is time to go deeper on the global design issue, undertaking an innovative conservation research as a condition for building a better future. As Gropius stated, the “design from the cup of coffee to the urban plan” ability is the challenge for the next docomomo International Conference that will take place in Espoo, Finland, from the 7th to the 10th August 2012.