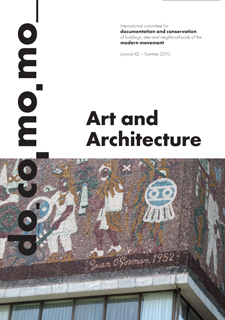 Editorial:
Art and Architecture, a Synthesis – by Ana Tostões

Essays:
On Modern Architecture and Synthesis of the Arts: Dilemmas, Approaches, Vicissitudes – by Horacio Torrent
Plastic Integration in Mexico: Confluence or Nostalgia – by Louise Noelle
Muralism and Architecture: Art Fusion at Mexico´s University City – by Lourdes Cruz
Mexican Art in Lund’s Museum of Sketches, Sweden – by Linda Fagerström and Elisabet Haglund
Alexander Calder’s Flying Saucers – by Jørgen Petersen
The Dwellers: The Integration of Art and the Architecture in the Ciudad Universitaria de Caracas – by Hannia Gómez
The Integration of the Arts – by Carlos Raúl Villanueva
Parallel Lives: Transparent Sculptures, Porous Architectures – by Carlos Eduardo Comas
Roberto Burle Marx: Painting, Architecture and Landscaping in the Creation of a New Language for Gardens – by Lauro Cavalcanti
Art, Architecture and Public Space in New York, 1950–1970 – by Theodore Prudon
Art, Spectacle, and Permanence. Notes on Le Corbusier and the Synthesis of the Arts – by Stanislaus von Moos
The Total Artist. Max Bill according to Tomás Maldonado – by Alejandro Gabriel Crispiani
The Synthesis of the Arts and MoMa – by Barry Bergdoll

Editorial:
Art and Architecture, a Synthesis by Ana Tostões

The argument of this docomomo Journal is the relation between Art and Architecture. Following the Synthesis of Art concept, this theme is the result of a challenge which is related to the Mexican University City (UNAM) public spaces created by the link between the buildings, the works of art and the space within. This year of 2010, when docomomo major Conference is hosted at the UNAM, the impressive stimulus of this campus settlement is the starting point that justifies going deeper in this relation that connects esthetics and ethics.

The question of the Image of Modernity has been discussed in docomomo Journal 14, exploring the aesthetic dimension and the poetic side of Modern Architecture production. The meaning of avant–garde aesthetics was understood beyond an image as a true aspiration for the emergence of a new culture focusing the strong conceptions of the Modern Movement rather than a modernist imagery.

Starting this new cycle of our Journal when we settled the docomomo Headquarters in Barcelona at the Mies van der Rohe Foundation last January, we wish to come to this important issue introducing the post Second World War dimension related to the New World accomplishments. The late CIAM discussions, namely the ones that took part in the scope of the Bergamo Conference in 1947, brought social and intensive public aspirations. Between North and South, the new world retook the European avant–garde issues implementing the most collective values for a better future to come. Giedion’sArchitecture You and Me or the struggle for a New Monumentality, were the placed questions that received an extraordinary eco from American Architecture which emerged with a creative energy. Therefore, in our days, the aim is to deepen understand the process and to find the paths for the future. A future that we may create with such awareness that may, generously, give us the tools for increase nowadays architecture and city planning.

Carlos Lazlo and Mario Panni, among others, performed a teamwork devoted to a collective and social architectural mission. This proposed new monumentality understood, not only as a progress symbol, but above all, as a motor for the future was based on technology and overall in an experimental creativity without banners. By pushing CIAM discussions towards aesthetics issues, they understood the importance of the civic center envisaged as the 5th function, looking for the possibility that “the man in the street” might be able to appreciate the synthesis between art and technique, between art and architecture.

I wish to thank Horacio Torrent who, from the first moment, accepted to be guest editor of this newdocomomo Journal. Due to his commitment and energy, and to the skill of a wide range ofdocomomo members and researchers that have contributed with their knowledge and dedicated work, it is with great pleasure that we present this Journal.

A variety of disciplines and points of view represented by professionals and scholars, show the vitality of docomomo people’s network. An image of heterogeneity within the cultural universality reflecting on modern heritage preservation, is a collective effort that must improve the role that docomomoplays in the Documentation and Preservation of Modern Movement Architecture: From Brazil to Caracas University and the Mexican muralists, from Calder to Max Bill, from Burle Marx to Josef Albers, from the corporate American design to the MoMA role, who surprisingly brakes the classic museum concept by bringing architecture to people’s lives in a all new perspective, we are proud to accomplish this first colored Journal as a tribute to this creativity.

Today we live a time that requires, as Hubert–Jan Henket said, an “integrated effort of sciences, technology, arts and ethics”, in order to fulfill a better future “based on social, technological and cultural responsibility and innovation.”