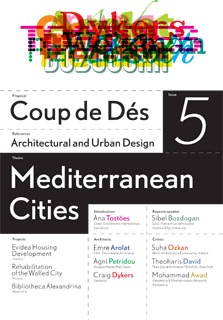 Coup de Dés is the title of a series of seminars conceived as an opportunity to discuss the propositions that inform the architecture being built today. The intention is to depart from a series of completed works and to open up a debate on their significance.

Regarding the concept behind this series, Ignasi de Sola-Morales had established its defining principles before his premature death in 2001:

“The reference to the text by Mallarmé serves as our departure point. There is nothing pre-established. Not even plurality, hybridisation or multiplicity. Today’s architectural project is a risk, calculated or not, faced with an unlimited number of possibilities. Acuteness, ingenuity, astuteness or chance are the reference points of a reality that appears un-disciplined, disordered, un-leashed.

To pose the questions why does this happen, what is proposed and what is achieved is to attempt to understand the project: something artificially superimposed on reality to trap some kind of energy, a form, a trait.

To pro-ject is to launch a configuration, a hypothesis, convinced that it will be able to process lines, fractures, folds that concentrate peculiar energies existing in reality. To cross these lines, elaborate the conflict, to fashion these knots has always been the purpose of the project.”

The Coup de Dés seminar examines a group of contemporary works. Each work is the object of a presentation by its author, followed by a response delivered by a critic in the field of architecture or other disciplines who proposes an interpretation of the project and raises related questions of a more general nature. This publication brings together the different presentations, responses and debates that formed part of the Coup de Des hel at the Mies van der Rohe Pavilion in Barcelona on April 16 & 17, 2010.

Docomomo International and the New Headquarters in Barcelona

Conceived as a site for political celebration and cultural affirmation of Modern architecture, the Barcelona Mies van der Rohe Pavilion, built in 1929 and reconstructed between 1983 and 1986, is of high symbolic value, evidence of which is the initiative to reconstruct it according to the original spatial, constructive and material concepts. By rescuing it from the 1920s, the aim was not only to provide public access to this twice innovative building but also to stress the importance and significance of Barcelona within the realm of contemporary architecture.

The Mies Pavilion challenged traditional definitions of space, human perception and motion. In this unique work, Mies was preoccupied with philosophical attempts to create a modern version of humanism in which a literal human presence was essential to the definition of architecture. As Mies argued ‘the architect does not draw the consequences from the new mode of living and producing by a mere acceptance of mechanization, typification, and norms.’ In addition, he declared that ‘what is decisive is only how we assert ourselves toward these givens. It is here that the spiritual problems begin.’ Over the last few decades, the Mies van der Rohe Foundation has been faithful to these principles and ideas and has been engaged, on an international level, in activities devoted to architecture and the contemporary city, which have secured its recognition worldwide. Thus, this symbolic, geographical and also cultural and scientific articulation constitutes a guarantee for the perpetuation of the Docomomo spirit and the enhancement of its future vitality. The reconstruction of the Pavilion and the European Union Prize for Contemporary Architecture – Mies van der Rohe Award have jointly helped to create a cultural environment that places Barcelona at the core of the debate on modern architecture and its legacy. It may be from Barcelona that the discourse on modernity will find its echoes in the new millennium.

Broad Guidelines Based on the Motto of Continuity and Change

Docomomo is a worldwide network of people motivated by belief in the value of Modern Movement architecture. In other words, Docomomo gathers a cluster of professionals, such as practicing architects, town planners, researchers, historians and theoreticians who share strong convictions regarding the importance and innovation of modern architectural design. This affinity with modernity relies on the persuasion that modernity is a worldwide heritage, a sustainable design tool, a project thinking method and finally, a key for the future of architectural production and cultural debate. The proposal for the new headquarters to be in Barcelona at the Mies van der Rohe Foundation under my chairmanship is based on the belief that the challenge of forthcoming decades must be faced with a twofold strategy:

1. On the one hand, to conduct highly skilled, sustainable, exemplary interventions in buildings, neighbourhoods and landscapes of the Modern Movement.

2. On the other hand, to widen the territorial scope by investigating new cultural and geographical territories where modern architecture has played a significant role.

Our goal is therefore to stimulate new skilled interventions in a vast number of meaningful places in order to demonstrate modern architecture’s long-life thinking process and ensure the recognition of modern cultural identities worldwide.

For a long time, modern architecture historians and critics tended to focus their analyses on highly specific geographical areas, domains of cultural, political and economic centrality. Today, immersed as they are in a historical juncture characterised by the globalisation of knowledge and information, Euro-central or Westernised readings are becoming increasingly questioned. Indeed, decades ago, critics recognised the Modern Movement as a potent regionalist component that gave rise to some of its richest and most astonishing manifestations. In order for the Modern Movement to be judged as it deserves, we must continue to go beyond orthodoxy and learn to appreciate the value of diversity and plural expressions. The Docomomo International conference in Ankara, entitled ‘Other Modernisms’, marked what is merely the beginning of a new thematic discourse on modernity as the locus of diversities. This new perspective was framed by a strong Mediterranean modern expression and influence which, as we know, Turkey embodies.