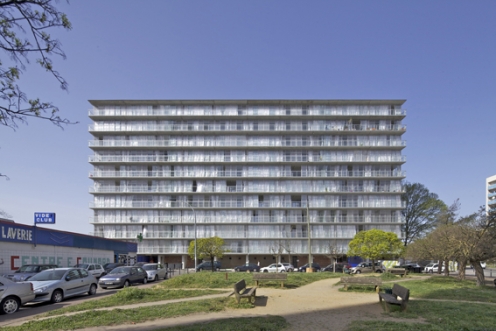 Together with Lacaton & Vassal and Christophe Hutin, he won the Mies Van Der Rohe Award 2019 with the refurbishment of three social housing buildings from the 1960s in the ‘Grand Parc’ (2015) urban district in Bordeaux. Innovative renovation of the existing housing blocks with 530 apartments not only improved the quality of living inside the apartments, but also the quality of the surrounding outdoor space. The main focus of the design was on optimising its cost and its ecological impact. Winter gardens and terraces with a depth of 3.8m were added to the volume and the small windows were replaced by large sliding doors that open onto them. These were realized by means of ready-made elements. This was done in order to make the work run as smoothly as possible and to minimise the impact on the residents: the apartments remained inhabited during the work.

Other reconversion projects in which the same vision was used were the sixteen-storey 1960s residential building ‘Tour Bois-le-Prêtre’ (2011) in Paris and a publication ‘Plus + Paris’ (2004), which examined the densification and updating of habitability of the city by looking at 1648 urban cases.

Frédéric Druot Architecture, based in Paris, was founded in 1991. Manager-architect Frédéric Druot graduated from the Bordeaux School of Architecture in 1984. In 2004, together with Lacaton & Vassel, he published the book ‘Plus – Les grands ensemble de logements – Territoire d’exception’ in which they offer an alternative to the planned demolition works of post-war residential towers in Paris and France.