Women’s creativity since the Modern Movement (MoMoWo) is a large scale cooperation project co-funded by the Creative Europe Programme. 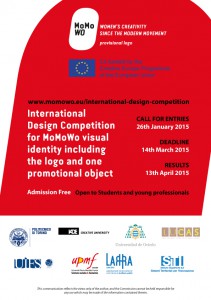 description: the activity is devoted to the conception of MoMoWo visual identity and to the design of one promotional object.

objectives: empowering audience through upstream participation. The activity has also the aim to support the creation of a MoMoWo brand through the design of the logo and the overall graphic identity to be integrated both in the website, case its APP and in 5000 promotional objects (gadgets) to be manufactured. The logo will be also used to design the QR Code.

beneficiaries: the activity is addressed to design students and young designers, vialis 40mg and it is aimed to involve participants in the EU and beyond through the launch of an International Call for competition. An international Jury is involved.

communication and dissemination: the competition is launched and managed through this webpage. The winners will be announced at the “Festival dell’Architettura” in Turin 2015.
The promotional objects manufactured will be disseminated during Public Presentations and the carrying-out of project activities.

sustainability: logo will be published on all publications, there thus remaining visible beyond the term of the project.