The Shukhov Tower is saved for now!

Great news! The Shukhov Tower is saved for now!

Docomomo International congratulates our colleagues from Docomomo Russia and the entire Docomomo network who has fought for the protection of Shukhov´s Tower in Moscow! 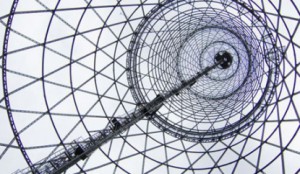 purchase Moscow, Russia, 1922″ width=”300″ height=”174″ />“Moscow City Hall has formally prohibited the moving or reassembly of a Soviet architectural landmark that has been under threat of demolition blamed by conservationists on real estate developers.The conservation order for the iconic Shukhov Tower on the central Shabolovka Ulitsa dates back to July 10, but did not appear in online legislation databases until late last week.The radio tower´s materials, architectural composition, structural elements and location all fall under the conservation order by City Hall´s heritage department, published by Consultant.ru judicial database.This puts an end to earlier proposals to move or dismantle and rebuild the tower.The hyperboloid structure is a masterpiece of Soviet modernism built in 1922 by Vladimir Shukhov, who has been named as an influence by the likes of Gaudi, Le Corbusier and Norman Foster.The state-owned tower is in disrepair after decades of neglect. In recent months, various official agencies have called for the tower´s demolition on the basis that it is a potential hazard.Dismantling the tower and reassembling it elsewhere was also discussed, a move that independent conservationists said would benefit real estate developers.The motion to move or demolish the tower had sparked protest in Russia and beyond, with leading architects such Rem Koolhaas protesting against it in a public appeal to President Vladimir Putin, who kept mum on the issue.City Hall´s order proposes including the tower on the federal list of protected heritage sites.Restoration work will be carried out on the tower with the new rules in mind, though no time frame has yet been determined, Izvestia reported Monday.Architecture experts told The Moscow Times earlier this year that if the tower does not undergo maintenance work in the next five years, it will become a danger to the neighborhood.”[by The Moscow Times] The Shukhov Tower in the news:MetropolismagThe Moscow Times
The Metropolis
The Guardian