Something Concrete and Modern

When a wealthy client appointed young local architects Gordon Ryder and Peter Yates to design her new home, she simply asked for ‘an atomic cot, something concrete and modern’. 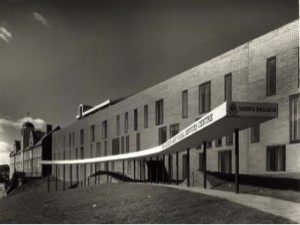 The Something Concrete and Modern tour is an opportunity to visit the buildings and changes to the towns and cities of the north-east region in the years following the Second World War.

The North-east post war landscape offers some of the defining built (and unbuilt) works of nationally and internationally recognised designers from Ove Arup to Victor Pasmore, James Stirling to Ryder and Yates and Berthold Lubetkin. Newcastle was the first city to adopt dedicated town planners with bold ambitions to reshape the city that fundamentally shaped the places where we live and work. The expansion of the region brought several new towns with local authorities building on an unprecedented scale. The majority of buildings were by unknown local architects, working in public or private offices of which both the buildings and a record of their work is steadily disappearing.

The tour will offer the opportunity to reflect and evaluate the significance of the period in architectural design and planning in a particular locality and to understand if lessons can be learnt from the success and failures or how the built environment was shaped and how attitudes have changed.