Turin Exhibition represents an icon of the twentieth century internationally known for the intervention by the famous engineer and builder Pier Luigi Nervi, clinic which expanded the´ original building designed by the Italian architect Ettore Sottsass Sr. in 1938, by combining the first time in a large-scale structure his highly personal use of ferrocement with the extensive use of prefabricated elements. In particular, designed the corrugated vault and the related ribbed apse of extraordinary elegance of the main pavilion B (1947) and the refined texture of the vault of the adjacent pavilion C (1950). 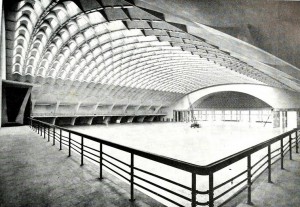 The complex was closed in 2001 and, in subsequent years, it has hosted only a few events and now exists in a state of semi-neglect and decay. A restoration and redevelopment project was drawn up by the Town of Turin and by the Polytechnic of Turin in 2014; it provides to establish the “Campus Valentino”, “The citadel of literature” and “The Campus of Design and Architecture”, a plural cultural centre, with documentation, education and conservation activities. Its realization requires 98 million of euro, a huge sum that local institutions alone are not able to achieve. Therefore, the Polytechnic of Turin is trying to solve this problem by means of a thesis focused on finding alternative ways to raise funds to finance cultural projects, with a deep analysis of the way called crowdfunding, which plans to obtain a significant amount of money through a collection of small donations from different people by means of a website. This research purpose is to demonstrate that a large number of little donations coming from different people are able to achieve the amount of money needed to realize a cultural project that local institutions are not able to accomplish due to the current shortage of funds. In order to understand if a crowdfunding campaign may help to raise funds for this project, it is expected to administer an anonymous survey to a representative sample of subjects to learn about their willingness to donate a sum of money to save an icon of the twentieth century.

The survey can be taken here.