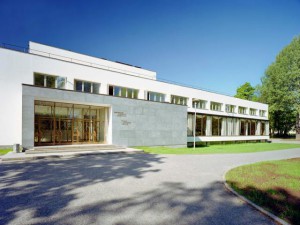 In 1927, Alvar Aalto entered and won an architectural competition for a municipal library in what was, at the time, the Finnish city of Viipuri. Aalto’s winning design was modified multiple times before completion in 1935. In its final form, the library reflected a functionalist design with a personalized modern vocabulary evident in and informed by other projects undertaken by the architect during the pre-war period. Collectively, those works brought international recognition to Aalto.

Despite early and widespread acclaim for the library, its history reveals a near-tragic struggle to survive challenges including war, shifting borders, and abandonment. First in 1940 and permanently in 1944, Viipuri and all other cities located in the Finnish region of Karelia were ceded to the Soviet Union and all property fell under Soviet control. Viipuri, which became Vyborg, was heavily bombed during WWII; the library sustained damage but remained intact. However, close to a decade of abandonment following the war left many of the building’s elements, including surfaces, fittings, and furniture, beyond repair. The 1950s ushered in a series of largely inappropriate repairs and attempts at restoration, often carried out with a lack of understanding of Aalto’s techniques and materials.

The Restoration
The restoration of the library, officially completed in 2013, reflects over two decades of international efforts, particularly cooperation between Finnish and Russian parties. The 1970s and 80s saw an increase in Finnish national concern for the library, yet it was not until the dissolution of the Soviet Union that a clear picture of the library’s conditions emerged. In 1992, the Finnish Committee for the Restoration of Viipuri Library was established and began what would evolve into a 21-year project.
Viipuri Library was listed on the World Monuments Watch in 2000 and 2002 and WMF made a grant of $300,000 from its Robert W. Wilson Challenge to Conserve Our Heritage to restore the 58 signature skylights over the reading room and lending library. Certain features from the Soviet-era renovations were retained and restored as historical layers on the site.